Early Results — and Next Steps— for Seattle's Democracy Voucher Program

Recently, the city of Seattle launched an innovative Democracy Voucher program to reshape the way municipal elections are funded. In January 2017, every registered voter in Seattle was mailed four $25 vouchers that they could assign to qualifying candidates in the 2017 election for City Council or City Attorney. In future elections, the Democracy Voucher program will expand to include candidates running for mayor and Seattle’s seven district-level City Council seats. Candidates qualify for the program by agreeing to engage in a set of public debates and adhere to limits on spending and contributions. Although many cities and municipalities have matching programs for donors in local elections, Seattle became the first city in the United States to offer public financing through such a citywide voucher program.

The goal of the program is to broaden the donor pool in Seattle’s local elections. Municipal elections have been overwhelmingly funded by a small number of wealthy donors. Proponents of the Seattle reform expected the voucher distributions would increase the number of contributors, create a more diverse donor pool, and address concerns about the demographic representativeness of local donors.

The Democracy Voucher program met one key goal by expanding the number of Seattle residents participating in the local campaign finance system. In 2017, the number of people who redeemed their vouchers was more than twice the number who made a direct cash contribution to a local political candidate. In total, 10,297 residents made a traditional-style cash contribution in a local election – and only 4,960 of them contributed to a candidate for City Attorney or City Council. By contrast, 20,727 residents in Seattle returned their vouchers to candidates of their choice. 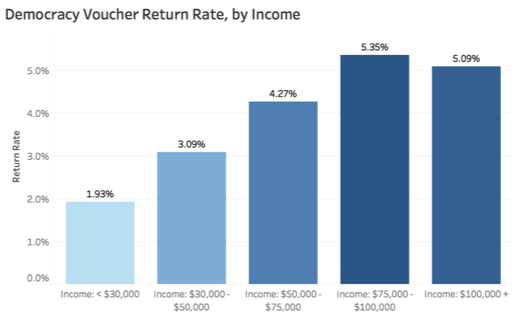 Our research shows similar disparities in engagement by age, race, and previous political involvement. Older residents in Seattle were three times more likely to participate than younger residents. More than six percent of Seattle residents over the age of 60 returned their vouchers, but only two percent of residents between the ages of 18-29 did so. 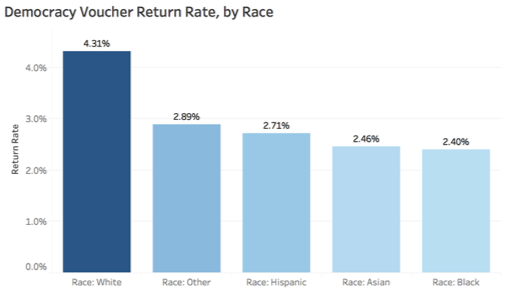 Finally, Seattle residents who, in the past, had regularly voted in general elections were much more likely to participate in the voucher program than those who voted infrequently or not at all. Among registered voters who voted in every election for which they were registered, more than eight percent redeemed their Democracy Vouchers, compared to just one percent of registered voters who had voted in fewer than half of the elections for which they were eligible.

While the Seattle Voucher program has only recently been launched, the patterns of unequal participation appear similar to patterns reported for other forms of political engagement, including voting in local elections. Our findings suggest clear opportunities – and challenges – for the city of Seattle and other municipalities experimenting with public campaign finance programs. Although the Democracy Voucher program pushed participation in local campaign finance to an all-time high in Seattle, historically under-represented groups remain substantially less likely to participate in the finance system. To increase the participation of young Seattle residents, infrequent voters, and non-whites, community stakeholders and government officials will need to take more active steps to ensure that all Seattle residents are well-informed about the program and feel encouraged to participate in it.  Making these vouchers available is the first step to democratizing the campaign finance system, but only when citizens regularly utilize their vouchers will Seattle’s program successfully broaden the chorus of voices in municipal elections.