The United States faces daunting challenges, yet to many Americans government appears to be full of craven politicians beholden to money or ideological extremists. Even when good people take office, they get mired in obstruction and deadlock.

Yet blame does not rest with politicians alone. As Alexis de Tocqueville famously observed in the 1830s, democracy works best when citizens have “knowledge of how to combine” and work together to call for and enable effective public action. This insight is as pertinent today as it was 174 years ago. If coalitions of ordinary people fail to organize and act effectively, most elected officials will defer to the big money and the extremists. Revitalizing American democracy depends on strengthening the citizens’ associations that link people to politics.

Of course, large numbers of groups already spend billions of dollars each year trying to draw Americans into public action. From elections to advocacy for health reform, jobs, and remedies for climate change, many organizations offer opportunities, and nearly four-fifths of the 60 million civically active adults in America report involvements with civic organizations, community groups, or political campaigns. Yet some of these do a much better job than others at getting – and keeping – people engaged. Why?

Conventional wisdom points to charisma, money, message and (these days) technology as the keys, so many organizations hunt for a charismatic leader, hire media specialists to craft messages, and, of course, do incessant fundraising activities. Some also leverage big data to target ever more recruits. Such efforts matter but leave a lot of civic potential unrealized.

I spent two years comparing organizations with stronger and weaker records of building activism. I observed what various organizations did and ran some field experiments. Tellingly, I discovered that the most effective civic organizations have rates of activism that are seven to twenty percentage points higher than those less effective. It turns out that investments in building the motivation, knowledge, and skills of members go a long ways toward explaining variations.

What if we evaluated America’s civic organizations like smart financiers assess their monetary investments? Any investor knows that it would be silly to invest in a company that had huge profits in one year yet carried no assets forward. The same is true for civic organizations, whose most important assets are their people. In my research, the civic organizations with the highest levels of activism were the ones that made the equivalent of huge profits in one year by engaging lots of people. But they did that in ways that sustained and built their assets for the following years and increased the capacity of their activists to do more in the future.

Smart organizations blend relentless efforts to get more people involved with systematic efforts to foster learning and networking among leaders and members. Instead of asking people to do easy, quick tasks, they urge them to take ownership of complex projects. Instead of encouraging solo work in the name of efficiency, they help activists work cooperatively. Effective civic groups engineer opportunities for participants to build relationships and learn from each other.

Does this sacrifice breadth for depth? Not necessarily. My research documents strategies that can be pursued separately, but also in combination. As a chart from my new book summarizes, organizations I call mobilizers focus on maximizing the number of people involved, while groups labeled organizers focus on developing participants’ capacities to lead and engage others. 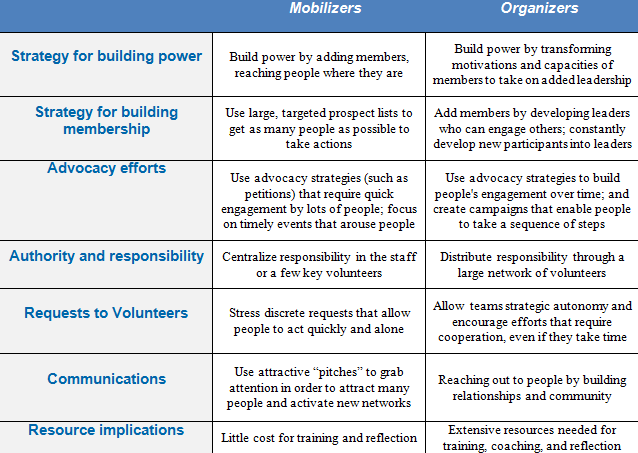 My research shows that America’s most effective civic organizations combine these strategies. Highly effective organizations – such as the Sierra Club – deliberately build leadership capacities among many of their activists and, in turn, contact and involve ever-expanding numbers of potentially interested people. Those who celebrate and work to renew American democracy have always known that people power matters. What I found through careful research is that widespread democracy practiced in and through civic organizations can further expand citizen power to tackle America’s greatest challenges.