How Polarization Reduces the Ranks of Republican Women in Congress

Why are there so few women in politics? This question has long puzzled journalists, pundits, and scholars. With women making up less than one fifth of the U.S. House of Representatives, America ranks 79th among national legislatures worldwide. However, a focus on the overall dearth of females masks the crucial fact that steadily growing numbers of Democratic Congresswomen now exceed Republicans by threefold. A close look reveals that the GOP’s recent sharp shift to the right has limited the growth of its female contingent in Congress.

The Shifting Affiliations of Women in the U.S. House

Just thirty years ago not very many women served in Congress, but they were evenly distributed between the two parties. Since then, the number of Democratic women in Congress has increased dramatically. The 1992 “Year of the Woman” elections brought the first significant jump, followed by steady increases in the numbers of Democratic Congresswomen. But the ranks of GOP women in Congress have barely budged. Women now make up nearly 30% of the Democratic delegation, while the proportion of GOP Congresswomen has hovered between six and ten percent since the 1980s. Of the 232 Republicans now serving in the House, only 19 are women, eight percent of the party delegation. 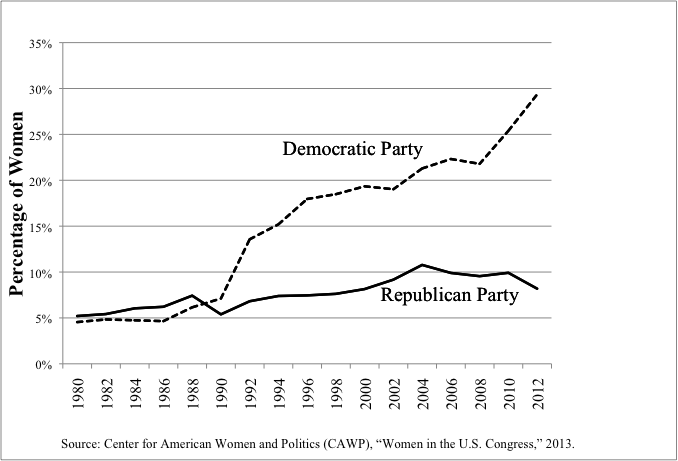 As the growing ranks of females in the House have tilted sharply toward Democrats, partisan polarization has also greatly increased. Over the past thirty years, both parties have become more ideologically homogeneous and separate from one another. Moderates are hardly to be found on either side of the aisle in today’s U.S. Congress, and the overall GOP delegation is positioned even further toward the right than Democrats are positioned overall toward the left. The chasm in the middle has disproportionately cut the ground out from under Republican women who might serve in Congress.

Of the 19 Republican women currently serving in the U.S. House of Representatives, only two of them – Florida’s Ileana Ros-Lehtinen and Texas’s Kay Granger – have remained in Congress since 2000. There has been a complete makeover of women in the GOP caucus, as virtually all of the Republican women who once served have been defeated or chosen to leave. Ultra-conservative GOP men have made great gains in the House.

State legislative office holding is the traditional pathway to Congress, and if we want to understand patterns of female representation it makes sense to examine the state pipeline. The figure below uses data from political scientist Adam Bonica to show the probability of running for Congress among female state legislators with varied ideologies. Strikingly, very conservative GOP female state legislators are much more likely to run for Congress than those with moderate preferences. Probabilities of running are low overall, of course, but the likelihood of a moderate female GOP state legislator resembling Olympia Snowe running for Congress is 0.2%, compared to 3.8% for an ultra-conservative like Michele Bachmann – a twentyfold difference. 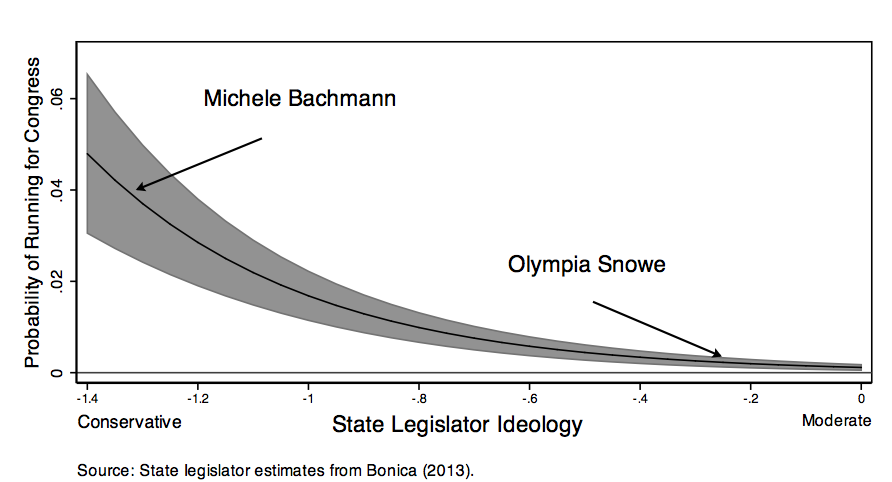 In both parties, moderate state legislators have become less likely to run for Congress, but polarizing shifts have disproportionately undercut moderate GOP women. Females in Republican ranks have historically held views to the left of their male co-partisans – and they are also perceived by voters to be more moderate than they actually are. Today’s pipeline of plausible GOP Congressional candidates contains shockingly few women. In the dataset used for the figure, between 2000 and 2010 there were nearly 6,600 Republican state legislators in the conservative half of the GOP pool – but only about 1,050 were women. Simply stated, conservative men are much better situated to run for and win GOP congressional seats. Partisan polarization and the sharp rightward tilt of today’s Republican Party are limiting the chances that GOP women will gain much ground in Congress anytime soon.

The Partisan Gap Among Women in Elective Office in 2020 and BeyondOctober 7, 2021
We Must Understand Challenges to Address Affordable Housing ProblemApril 12, 2021
A Letter to Aspiring (Male) FeministsJanuary 14, 2021