Advocates and policymakers have called for reforms to give more states leverage in presidential elections, and thus more evenly distribute electorally related benefits. However, many such reforms like abolishing the Electoral College in favor of direct elections are not viable because they advantage one party. A feasible alternative must not advantage either party. For that reason, reformers should look to the Competitive Plan. 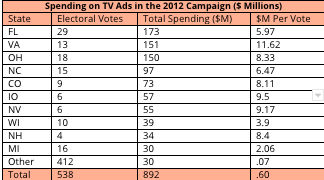 Almost all states use the winner-take-all method of allocating their Electoral College votes. In this system, the candidate who receives the majority (technically the plurality) of the popular votes takes all of the electoral-college votes for that state. The candidate who receives the majority of 270 electoral votes then wins. Two alternatives in particular have been advocated by reformers:

The Competitive Plan — Advantages and Obstacles

The Competitive Plan would benefit safe states by increasing revenue from elections and campaigns and making them politically relevant, incentivizing candidates to cater more evenly to state interests. An analysis of all of the presidential elections since 1900 demonstrates that the Competitive Plan does not offer either party a partisan advantage. Unlike all other suggestions for election reform thus far, the results of all 30 elections would have been identical if the Competitive Plan had been used to tally the votes.

What would happen if Vermont and Wyoming transition to the Competitive Plan together? Both states will become relevant to the candidates, and hence receive more attention and money. But this partnership, it turns out, would minimize partisan consequences. This partnership would have had no effect on the winner of any election since 2000; it would not have even affected any of the margins of victory. The largest effect it would have had was long ago, in 1968, when both states gave Nixon all three votes and Nixon won by 110 votes. Under the Competitive Plan, they would have both given Nixon two votes and Humphrey one.

An algorithm has been developed in order to find an ordering of pairs of states that “cancel each other out.” If the states had transitioned to this Competitive Plan two at a time (according to the suggested order), it would not have had any effect on the outcome of any election since 1900. This implies that whether or not other states transition, even if some do and others refuse, there is no partisan advantage to either side as long as each state makes this change only along with its recommended partner. Given the financial and political advantages that would come to pairs of states that make the transition together, it is clearly states’ interest to adopt the change, two by two.

In the 1820s, most states switched to the winner-take-all method to gain more political relevance. Ironically, two centuries later, this is the reason many of the states are largely ignored by the presidential candidates. But the country now seems stuck, because the safe states will not unilaterally transition to another system if they will be giving away votes, while the battleground states do not want change because they are making millions from the status quo. The Competitive Plan offers a bipartisan alternative in which safe states become attractive to the candidates but still avoid helping the opposite party from the one its voters currently strongly prefer.

In addition to the new vote portioning process itself, the Competitive Plan offers a simple method for a step by step transition. States pair up to maintain partisan balances during the transition politically. This makes the new system serve their best interest whether or not other states choose to adopt the change.

Battleground states have not been addressed at length in this brief, but a straightforward point can be made. Once all of the safe states have adopted the Competitive Plan, pair by pair, it seems likely that the battleground states will do so too. Even if they do not accept this change, their slice of pie will be greatly diminished. Attention from presidential candidates and the economic benefits of presidential elections would be much more widely spread across the United States.