The Past and Future Politics of U.S. Environmental Reforms

The 2009-10 campaign to pass legislation to limit U.S. greenhouse gas emissions and fight global warming was one of the biggest pushes in the history of environmental and energy politics. Some of the country’s largest corporations and best-financed environmental organizations worked with powerful figures in Congress to try to get a “cap and trade” bill enacted. After progress in the House of Representatives, opponents mobilized a fierce push-back and the Senate failed to pass any bill, dropping the effort in the summer of 2010.

The climate-change movement has yet to fully recover. No new movement-wide strategies have been devised to work for legislation limiting dangerous emissions. Perhaps new stirrings will begin now that President Obama has been reelected and promises to highlight the issue of climate change in speeches from the White House and new regulatory efforts. But Congress will be central, too, so it is important to look back to improve our understanding of climate-change politics and provide fresh insights to practitioners and policymakers.

Key factors frustrating efforts to pass climate legislation in 2009-10 included political geography, the economic recession, and intense opposition from energy interests. Votes in Congress were hard to find, and ultimately too few in the Senate, because of intense and disciplined GOP opposition combined with reluctance from Democrats representing states that had big oil or coal sectors or high dependence on electricity generated in coal-fired plants. The financial crash and recession starting in late 2008 reinforced the status quo by making the price of energy more salient and reinforcing scare campaigns. Finally, energy interests with a big profit stake in oil and coal went all out to deploy their financial and lobbying leverage.

Political Donations by the Coal Mining Industry, 2000 to 2012 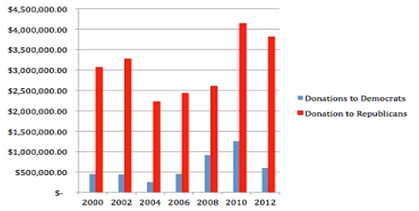 What Could Have Bolstered the Campaign?

Defeat for climate-change legislation was not inevitable. The 111th Congress saw major reform victories, including enactments of health reform and other measures affecting the economy and carrying uncertain fiscal and financial implications. In a way quite different from the cap and trade campaign, the movement for health care reform mobilized public opinion and used large-scale organizing to reinforce inside-the-Beltway efforts with grassroots mobilization through large-scale public organizing. A third favorable ingredient in the health reform effort was presidential leadership. Obama took stronger stands on health reform than on climate change legislation, and his focus helped to drive the successful effort to pass the Affordable Care Act.

The three ingredients of success are not separate, but closely interrelated. Supportive public opinion and mobilization depend on the strategies used in legislative campaigns. Whereas the health care movement focused on building public support for reform, the climate movement focused largely on enlisting support within Washington, DC. In turn, the divergent campaigns influenced White House priorities. Recently available evidence suggests that President Obama’s decision to prioritize health care was based on his perception of public support. Health care issues attracted more public attention and there was a stronger nationwide movement clamoring for reform.

The history of U.S. environmental policymaking confirms that public opinion and public mobilization are central to campaigns seeking economy-wide regulations. Many of the charter legislative achievements of modern U.S. environmentalism – including the Wilderness Act of 1964, laws about clean air and water in the early 1970s, and the Superfund pollution clean-up legislation of the 1980s – happened in the wake of widespread grassroots mobilizations and strong expressions of public support.

The failure of the climate campaign to learn from the history of American environmentalism is symptomatic of a broader dilemma. Over the last four decades, the environmental movement has consolidated into a set of large, professionally managed and mainly Washington DC-focused institutions. Organizations such as the Environmental Defense Fund and the Natural Resources Defense Council are very good at using science, law, policy, and lobbying to influence debates at the elite level. But they are not set up to organize coalitions or mobilize public support for major reforms. Their efforts focus on influencing law-making and regulatory policy in Washington DC, rather than encouraging citizen engagement and national movement-building.

Professional environmental organizations have achieved important victories and their efforts have also protected earlier regulatory accomplishments from fierce political counter-attacks. But as revealed by the failed effort to get sweeping new climate-change legislation during Obama’s first two years, established ways of doing professional environmental politics may not be equal to the biggest challenges of our time. It may be time for everyone with a stake in American environmental politics to rethink strategies and organization. Otherwise, it will be hard to mobilize widespread public support for new measures to counter threats from global warming and shift patterns of energy production and use across the entire U.S. and global economy. One thing is clear: it won’t happen just through inside-the-Beltway efforts.

Read more in Nathaniel Loewentheil, “Of Stasis and Movements: Climate Legislation in the 111th Congress,” Institution for Social and Policy Studies at Yale, 2013.