The Affordable Care Act aims to extend health insurance to tens of millions more Americans through two major routes: by giving people information and in many cases tax credits to help them purchase private insurance plans offered on state or national “exchanges,” or online marketplaces; and by giving the fifty U.S. states plus the District of Columbia additional federal funds to expand their Medicaid programs to insure all low-income people just above as well as below the federal poverty line. States have a key role in implementing health reform. Each state can choose to run its own exchange marketplace and help its residents learn about their options for purchasing affordable plans. Each state also decides whether or not to accept new federal subsidies to expand Medicaid (covering 93% of the costs from 2014 through 2022). What states do – or refuse to do – makes a big difference, as a comparison of the nation’s two largest states, California and Texas, makes clear. California is leading the way in showing that Affordable Care can work, while authorities in Texas are obstructing implementation with gusto.

California is home to more than 38 million people, and Texas to more than 26 million. Both states are ethnically and racially diverse, with large non-white and foreign-born populations, and both had large uninsured populations prior to reform. Uninsurance rates are markedly higher in the Lone Star state, however.

Both California and Texas residents have a lot to gain from health reform – but Texans clearly stand to gain more. The responses of state authorities do not line up with residents’ needs. Under the leadership of a Democratic governor and legislature, California is enthusiastically embracing the full implementation of health reform. But in Texas a conservative Republican governor and legislature are refusing to cooperate with health reform, and in some cases are actively obstructing enrollment efforts by federal authorities and local civic groups.

As of 2014, with California accepting the Medicaid expansion and Texas declining, the two states have sharper differences than ever in income eligibility for different population groups to get Medicaid coverage. In the chart below, 100% refers to an eligibility set at the federal poverty level – an annual family income of about $11,670 for a single person, $15,730 for a two-person family, and $19,790 for a three-person family. 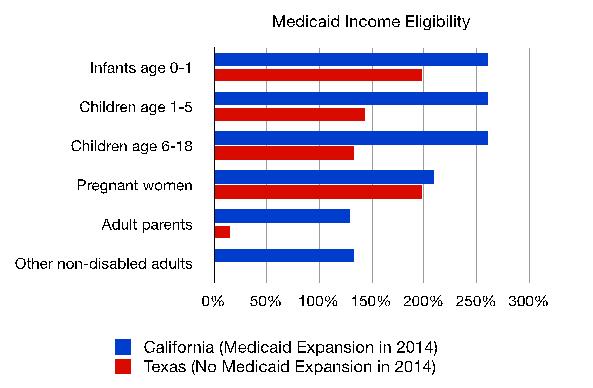 Not surprisingly, California is making rapid progress in realizing the potential of Affordable Care reforms. More than 600,000 Californians had purchased insurance plans on Covered California as of January 21, 2014 – taking the state about half way to its first-year enrollment target. Texas data are not updated beyond December 2013, but at that point only 118,000 Texans had managed to purchase plans on the federal insurance exchange. The Medicaid enrollment gap is even greater. More than two million Californians were newly enrolled in that state’s expanded Medicaid program by the end of December, compared to less than 50,000 Texans who signed up for Medicaid after realizing that they were already eligible for the existing state program.

Clearly, cooperation versus obstruction by state leaders makes a huge difference. California is on course to cover a large number of its uninsured residents through Affordable Care. But unless Texas authorities change course, their state will continue to have the dubious honor of being home to the largest share of Americans who do not have private or public health insurance.

Data for this brief were drawn from 2013 Census Bureau Current Population Surveys.

Understanding the Dynamics of Medical Marijuana Legalization in the United StatesFebruary 26, 2019
How America Can Effectively Fight the Opioid CrisisApril 26, 2018
American Preferences about Health and Social Programs are Shaped by Intersections of Race, Gender, and IdeologyFebruary 5, 2018