What do a sociologist and an engineer have in common? For professors Michael Haedicke and Jean MacRae, who study environmental pollutants from different disciplinary perspectives at The University of Maine, it’s the shared concern over a man-made contaminant found in many aspects of modern life. And the two researchers have not stayed quiet – they have been hard at work ensuring their research is seen by the residents and policymakers in their state.

The contaminants responsible for spurring this collaboration are called PFAS, frequently referred to as “forever chemicals.” They have been increasingly linked to serious health problems (such as certain cancers) and their presence has a long history in the United States. Dating all the way back to the 1940s, they can be found in household products, landfills, wastewater, surface water, sludge, and septage spreading sites. And in the agricultural lands of Maine, sludge and septage containing forever chemicals have been spread as fertilizer for decades.

Haedicke, an environmental sociologist, had studied certain kinds of environmental contaminants back in his home state of Iowa, but he gained greater understanding of PFAS contamination in particular after moving to Maine in 2020. “I became aware that Maine was really at the forefront of coming to terms with PFAS contamination, “ he said. “This was a state that was charting the extent of contamination and giving serious thought to remediation, to disposal, and to risk reduction.”

Haedicke wanted to invest more time and thought into PFAS contamination and the policies he saw unfolding around it. Along the way, he decided to seek the help of someone with an engineering background. Enter Jean MacRae, an environmental engineer whose research focuses on pollutants and who had recently been paying greater attention to PFAS. After combining their research perspectives on the issue, the two decided to put pen to paper and co-write an OpEd.

“The science nerd in me is so cautious about making recommendations that without the push of Michael wanting to write it, I probably would not have, “ admitted MacRae with a laugh. “But I’m certainly glad I did.”

The OpEd was published in The Bangor Daily News in July of 2022 through Maine SSN’s partnership with the paper. The piece pointed to some problems with legislation at the time that prohibited the agricultural use of wastewater sludge (such as increases in waste bills for Maine residents) and suggested Maine legislators focus on investing in a food system that would limit waste altogether.

The chapter sent the piece to members of two relevant legislative committees in the statehouse. As a result, they received a number of thank you notes from Representatives and Senators from both sides of the aisle. One of the notes they received was from Senator Stacy Brenner, who chairs the Environment and Natural Resources Committee and a new ad hoc committee that was set up to determine how to best utilize $60 million in emergency PFAS funding. Senator Brenner was excited to talk to MacRae and Hadedicke, and shortly thereafter the three got together for a meeting.

Haedicke was heartened to discover that there wasn’t much disagreement about what steps to take. “We found we have a lot of similar ideas on how to handle things,” he said.

As for the implementation of those ideas, MacRae shared that it may be some time before the PFAS legislation in Maine kicks in. In fact, it looks as though PFAS legislation will first be implemented in a few bigger states with more consumer power.

In addition to meeting with Senator Brenner, MacRae was also invited to bring her expertise to a panel organized by The Bangor Daily News in October of 2022. “It was well attended and presented the medical and agricultural side – the wastewater side of things,” MacRae said. She emphasized the value of holding such forums at a time when there’s “a real opportunity for legislation to continue to make the environment a little bit safer.”

“One of the strengths of that panel was on the one hand expertise like Jean’s that came from the research community. But there were also speakers who have been directly affected by PFAS contamination economically and health-wise,” Haedicke added.

Focusing on those affected is, in fact, what Haedicke hopes to do next. He plans to deepen his understanding of PFAS contamination by examining the consequences on communities and individuals. “A lot of the discussion right now is more centered on engineering – what to do about soil remediation, what to do about waste treatment, things like that,” he said.

Both MacRae and Haedicke expressed a sense of gratitude about the doors and conversations their OpEd opened up for them. Haedicke believes the success of the OpEd was in part due to the attention surrounding the issue already. “We were writing about something that a lot of people were in the process of thinking about. It wasn't like we were trying to introduce something new, “ he said. “There were a lot of different constituencies that were having conversations about PFAS and really, are still having conversations.”

They also stressed the importance of continuing to add to those conversations. “Attention moves on so quickly. To maintain relationships and to have a presence in the policy world, you have to be always coming to the table with a statement, “ Haedicke said. “You need to be there constantly, pumping things out or doing interviews.”

Despite their busy academic lives, both remain committed to carving out time to engage on an issue they are deeply invested in. 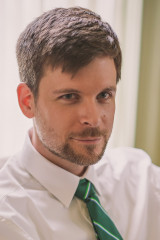 Haedicke's research focuses on food systems, labor issues, and environmental sustainability. Overarching themes in Haedicke's writings include the tensions between alternative and mainstream agriculture, the experiences of farmworkers and other vulnerable laborers in food systems, and the challenges of climate change adaptation.

MacRae's research focuses on pollution prevention and control, with a focus on biological treatment and transformation of pollutants. MacRae is interested in making our material and food systems more sustainable by recovering usable materials from "waste" and making the best use of resources we extract from the environment. MacRae is part of the Materials Management and PFAS teams in the Mitchell Center for Sustainability Solutions.