Immigration in the Midwest

From 1990 to 2010, newcomers to the United States were more likely to settle in states on the southern border or the East and West Coasts than in the Midwest, which lags other regions in terms of numbers of immigrants, share of immigrants in the state population, and the absolute expansion and percentage growth of the foreign-born. Eleven of twelve midwestern states are home to relatively small percentages of immigrants – averaging less than 8% of their total populations, compared with 13% nationally. However, there are dramatic contrasts within the Midwest.

Illinois is a major destination for immigrants, and ranks tenth in the United States, with the foreign-born contributing 14% of its population. Similarly, three midwestern counties ranked among the top ten in the nation in immigration growth from 2000 to 2010: Christian County, Missouri, saw 310% growth; Hendricks County, Indiana, had 294% growth, and Scott County, Minnesota, had 269% growth. These growth destinations stand in contrast to South Dakota and North Dakota, which ranked 47th and 48th among the fifty states plus the District of Columbia in the foreign-born percentage of total population in 2010. 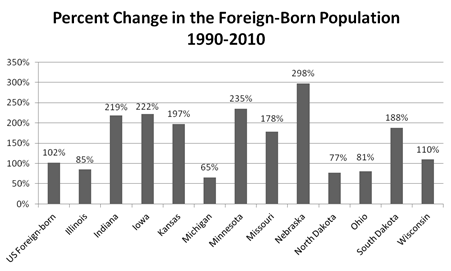 Why Do Immigrants Come?

Immigrants go where there are jobs to be found, and are also attracted by communities of people from their homelands, often in urban areas. At first glance, the Midwest might not seem promising as a place for immigrants to find jobs, because (as of September 2010) the region had a relatively high unemployment rate of 9.3%, compared with 8.6% in the Northeast, 9.2% in the South, and 10.9% in the West. But the overall percentage is misleading, because the Midwest unemployment rate is made worse by Michigan’s rate of 13% (the second highest in the country after Nevada). Midwestern states mostly have better employment situations than Michigan (and the Dakotas have especially low unemployment rates, although not many immigrants).

Immigration has boosted economic prospects in parts of the Midwest. The most dramatic demographic shift in the United States today is the aging of the population – a development that increases the tax burden on young workers who make payroll contributions to cover the costs of Social Security and Medicare. In many parts of the Midwest, the aging of the population has been heightened by the out-migration of young native-born workers, a phenomenon that Peter Rogerson and Daejong Kim aptly call “the emptying of the Bread Basket of its breadwinners.” Immigration can help to counter the effects of departing native young people, and in many areas of the Midwest that are experiencing rapid immigration, economic growth is relatively strong.

A final important feature of midwestern immigration is the high proportion of refugees, people who have been admitted to the United States to escape persecution in their homelands. In all but two of the twelve states, the percentage of refugees exceeds that for the United States as a whole – and this means that immigrant populations are quite diverse, because refugees arrive from many different nations of origin. Five Midwestern cities – Chicago, Minneapolis-St. Paul, St. Louis, Detroit, and Cleveland – are among the top 30 U.S. metropolitan areas receiving refugees, and the extraordinary diversity is easy to see. In the Minnesota Twin Cities, for example, communities of Somalis, Hmong, and refugees from the former Soviet states are all to be found, in addition to the Latino immigrants common across the United States.

Welcoming or Not? Laws about Immigrants

Frustration with the lack of comprehensive immigration reform at the federal level has led many U.S. states to pass bills aimed at excluding undocumented immigrants, and midwestern states are no exception. But just as the presence of immigrants varies greatly across the region, so do state laws about immigrants. Some are simply resolutions honoring individuals or immigrant communities for their social and humanitarian contributions, while others take different sides on hot-button issues. Illinois, for example, passed a statute (later invalidated by a federal court) prohibiting employers from participating in the E-Verify system to check the Social Security documentation of workers. In contrast, Missouri, Indiana, Nebraska and Kansas have passed restrictive laws, including measures mandating the use of E-Verify. The most punitive laws have been proposed or enacted in Indiana – including one that mimics the controversial Arizona law requiring local and state law enforcement officers to check the immigration status of people they stop, whenever they “reasonably suspect” them of being in the country illegally.

This brief is based upon research conducted in the spring of 2012 for the Chicago Council of Global Affairs by Katherine Fennelly and students in her graduate seminar on Immigration and Public Policy: Libby Caulum, Allison Boyle, Silvana Hackett, Marie Kurth, Robert Painter, Julia Peasley, Meredith Stocking, Nate Thompson, Morgan Winters and Lisa Ziegler.