Policymakers, journalists, and community leaders rely on the free and accessible research of SSN scholars to understand the impact of COVID-19 for communities across the country. Support our work today.

In a study recently published in the journal Nature Climate Change, I use a new measure of what I call the “carbon intensity of human well-being” to get at the true meaning of sustainability – which is supposed to be about enhancing human well-being while reducing environmental impacts. At five year intervals from 1970 to 2009, I measured for each nation the amount of carbon emissions from industrial sources and other human activities divided by the country’s average life expectancy at birth. If a nation’s score for carbon intensity of human well-being went down over time, this meant that sustainability is improving.

Many analysts have presumed that economic development eventually brings wealthy nations to a point where further growth and associated increases in human well-being can happen without greater environmental impacts. But is this happy outcome actually occurring? And what does economic development mean for the carbon intensity of well-being in low- and middle-income nations in developing regions of the world? My research provides answers to these questions by estimating the changing effects from 1970 to 2009 of national gross domestic product per capita on the carbon intensity of well-being.

For the analysis I sorted nations into four sets – including 27 relatively high-income nations found in North America, Europe, and Oceania; 36 developing nations in Africa; 21 developing nations in South and Central America; and 22 developing nations in Asia. For each regional set, the following figure graphs what scholars call “elasticity coefficients” to get at how much the carbon intensity of human well-being goes up or down for each one percent of economic growth (that is, percent increase in gross domestic product per capita). From a sustainability perspective, we would want to see negative coefficients and downward sloping trends, since those would suggest that economic growth, extended human lifespans, and relatively lower carbon emissions can all advance together. 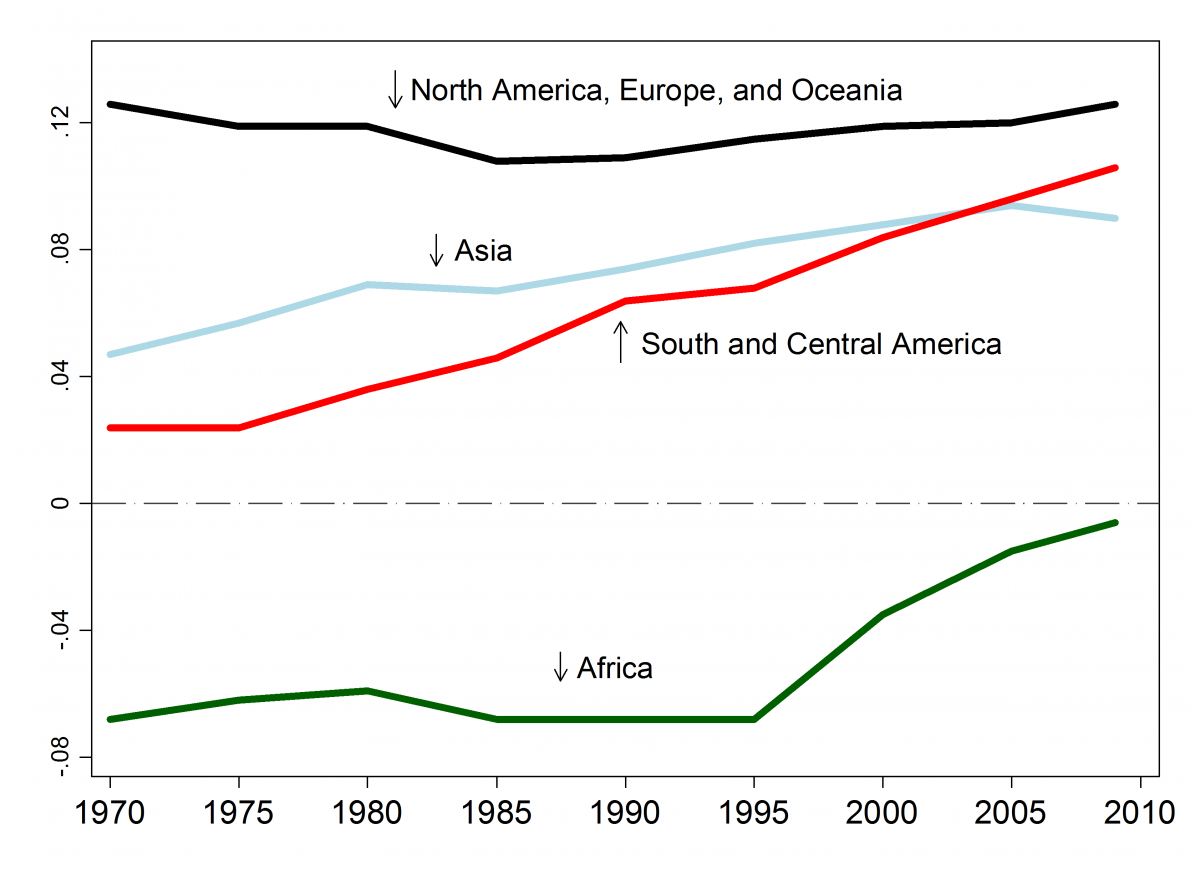 But my overall findings were not encouraging:

Returning to the key question of whether economic development is a viable pathway to reducing the carbon intensity of human well-being, my results suggest that the answer is “no.” Despite some variations in the experiences of individual countries, none of the world’s regions has registered sustained reductions in carbon intensity of well-being as economic development proceeds. The sobering reality is that sustainability is not a natural byproduct of economic development. If countries want to enhance sustainability along with economic growth, they will have to look for ways to reduce energy consumption, improve the efficiency of production and transportation, and improve human life and happiness through less carbon-polluting activities. Surely this is possible, but economic development as usual will not suffice.

The Value of Democratic Debate about International Trade AgreementsAugust 24, 2014
Women Have a Strong Stake in Sustainable Development - And Female Clout Can Help to Achieve ItMay 5, 2014
How the Endangered Species Act Helped Texans Overcome Intractable Economic and Environmental ConflictsSeptember 5, 2019