Studying the interconnections between society and climate requires new methods to bridge the historically separate realms of the social and natural sciences. Social scientists, for example, may use interviews to collect data on individuals, groups, or governments, while natural scientists use instruments or even satellites to measure temperatures, storms, or carbon dioxide emissions. Integrating such diverse types of data into common analytical frameworks presents challenges and opportunities for research on how climate change affects society, and vice versa.

Social data often describe bounded places, such as communities, regions, states, or nations. But physical measurements of air quality or temperature do not usually remain within such boundaries. What can be done to reconcile these different kinds of information? To get rough indicators for socially defined places, physical data can often be redefined to give averages or rough indicators – such as the trend in average winter temperatures for a region or shifts in per capita greenhouse gas emissions for a nation. Physical data can then be combined with social data on many observational units – communities, regions, or nations – to study how social and climate factors vary together. For example, the following graph compares the percentage of people who think that climate change has affected their region to measured changes in winter warming in nine rural U.S. regions. 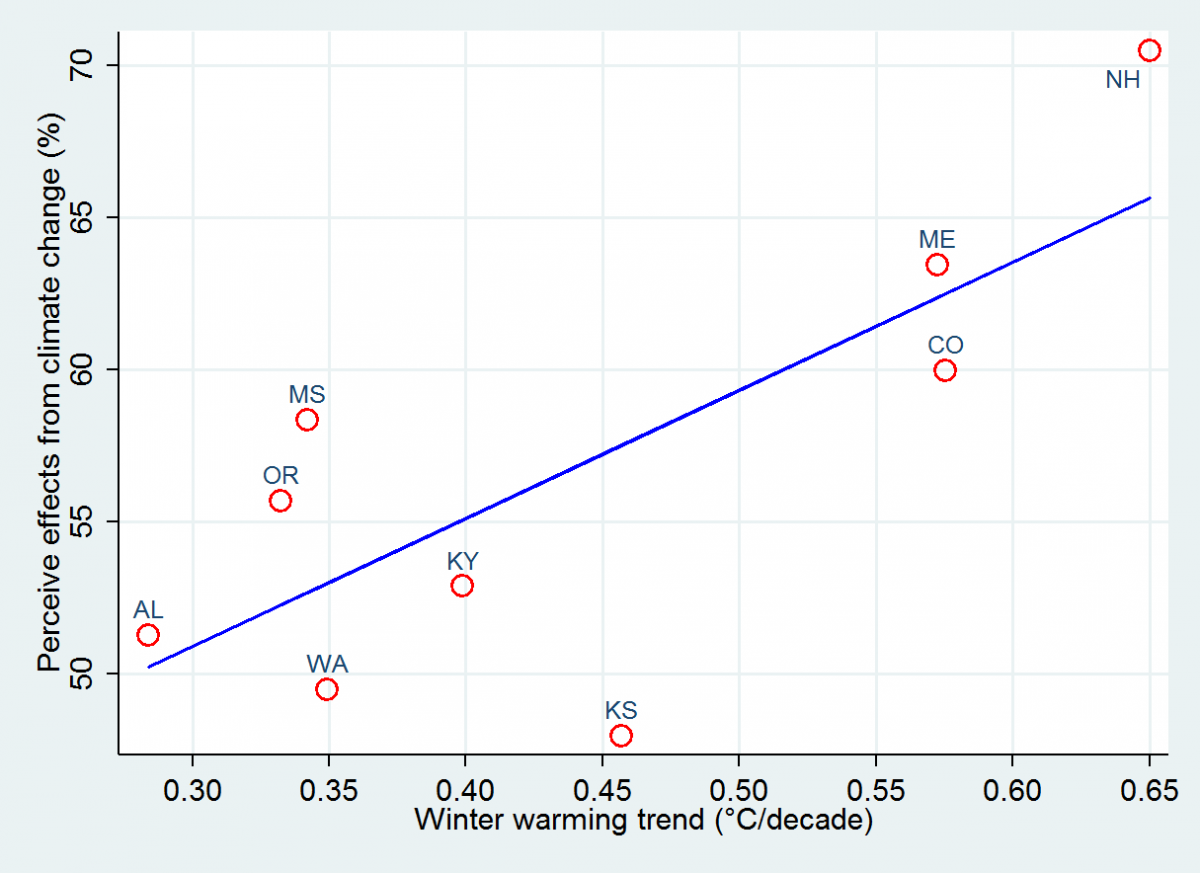 Combinations of social and physical data can be used to answer questions such as these:

How and Why Do Countries Differ in Greenhouse Gas Emissions? Some work has focused on the relationship between a country’s economic activity and its carbon dioxide emissions or “footprint.” In poorer countries, greenhouse gas emissions tend to rise as the economy grows. In wealthier countries, however, further economic development can reduce emissions if economies grow in less energy-intensive ways. So the relationship of economic growth to greenhouse gas emissions can shift. Even within groups of similarly affluent or poor nations, some countries may emit far more carbon dioxide per person than others. Comparative analysis can pinpoint factors – such as renewable energy or public transportation investments – associated with lower greenhouse gas emissions for any level of economic development.

Does Climate or Weather Affect Public Opinion? Survey responses can be merged with data on daily weather, climate trends, and extreme events to discover what influences people’s views of climate change in different regions or under different conditions. For example, this graph of data from New Hampshire shows that beliefs about climate change vary depending on respondents’ political party affiliations and whether unusually warm or cool temperatures happened on the day they were interviewed or the previous day. The views of Independent voters were affected by weather variations – but committed Democrats or Republicans held fast to their contrasting opinions regardless of weather. 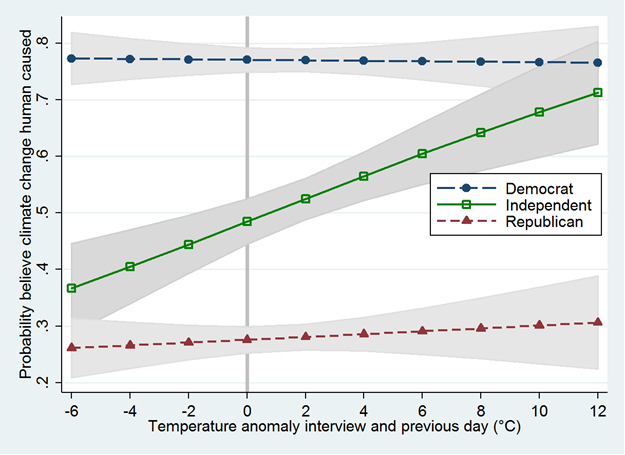 So far, scholarly studies have found that, compared to political affiliations, weather and climate have weak and inconsistent effects on public views of climate change. But things may change as unusual weather and extreme events become more common in many regions. Looking for possible links between weather and beliefs remains a hot research topic.

How Interest in Science Boosts Trust in Climate ScientistsJuly 10, 2018
Community Responses to Large-Scale Energy ProjectsJanuary 1, 2017
What Do Americans Think about Climate Change at the State and Local Level?May 19, 2015