Republicans since the 1970s have argued that the federal government should turn more control to the states. Yet over the last forty years, Congress has enacted increasing numbers of laws that do just the opposite, by preempting or placing limits on states and localities they make policies at variance with federal laws. Despite Republican rhetoric, both parties have contributed in relatively equal measure to the dramatic increase in federal preemption across many policy areas. We argue that both parties have used preemption to increase the power of the federal government as a way to pursue partisan goals: Democrats preempt state law in order to increase regulation and Republicans use preemption to limit regulation by state and local governments.

Both Parties Do It – But in Different Ways

Federal preemption of state power has grown dramatically. From 1900 to 1960, Congress enacted just 124 laws that preempted state authority, but 435 such preemptions were enacted from1960 through 2007. Both parties have contributed in relatively equal measure to the upsurge. Democratic President Clinton and Republican President George W. Bush each signed 64 preemption statutes during their eight years in office; indeed, President Bush did not veto a single preemption bill. Likewise, from 1990 to 2012, the average number of preemption laws was almost the same during Democratic versus GOP control of the House of Representatives.

Although both parties have increased their use of preemption, they have done so in different ways tailored to their competing partisan agendas. Democrats are more likely to put forward ‘floor’ preemptions, which create a baseline level of regulation that every state must meet but that states can exceed if they so choose. Floor preemptions have the potential to maximize regulation by demanding that laggard states provide a minimum level of protection while progressive states are allowed to enact more stringent regulations.

Despite their public support for limited government and states’ rights, Republicans are just as likely to engage in preemption. But they are more likely to enact “ceilings” that limit states’ ability to regulate the market and restrain state attempts to enact greater protections than those set at the federal level. From 1990 through 2012, when Democrats had the majority in the House, 57 percent of preemption statutes passed were floors, but when Republicans controlled the House, just one-third of preemption laws set floors, while two-thirds mandated ceilings.

Where the Floor versus Ceiling Gap is Greatest

The partisan use of floors versus ceilings plays out differently by policy type, in ways that make sense given each party’s political goals. Republicans more often use ceiling preemptions for policies that regulate business and commerce, thus minimizing state regulations opposed by key GOP constituent groups. Under Republican House control, 62 percent of preemptions dealing with banking and finance issues set regulatory ceilings, compared with only 40 percent of the banking and finance preemptions passed under Democratic House control – a 22 point gap. Seventy-five percent of Republican-led preemption statutes that addressed commerce, energy, labor, and transportation involved regulatory ceilings, compared to 58 percent of such preemptions enacted under Democratic House control – a 17 point gap.

Across the aisle, Democrats often use preemptions that set floors on matters of health, safety, and environment, demonstrating their commitment to consumer and environmental protection. Three-quarters of such laws passed under House Democratic control were floors, compared to only 36 percent passed under Republican majorities. Likewise, Democrats enact more floor preemptions to expand civil rights protections against discrimination. Republicans occasionally do the same, but also curtail state regulations to promote national security and limit access to abortion. 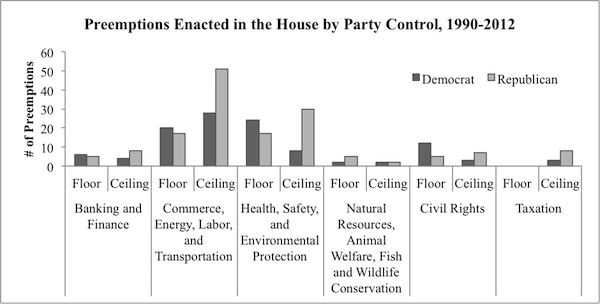 Our research suggests that policymakers utilize preemption as a strategic tool of partisan politics. Federal lawmakers from both parties have used this tool to expand their authority versus states. In a surprising twist, our findings actually suggest that Democrats preserve a greater measure of state authority, even if they do it to protect states that want to do more regulation.

How can we make citizens aware of the growing use of preemption, so they can hold lawmakers accountable? As preemption has been expanded to enhance federal power and further partisan agendas, most Americans are unaware of the trend. The use of federal preemption should be more transparent. Some bills detail the ways they preempt state power, and we suggest that all of them should include such explanations in a readily accessible section labeled “Preemption.” By expanding the transparency of federal preemption, lawmakers from both parties would have to be more up front about how and why they are enlarging federal government power at the expense of the states.

Read more in Mallory E. SoRelle and Alexis N. Walker, “Partisan Preemption: The Strategic Use of Federal Preemption Legislation.” Publius: The Journal of Federalism 46 no.4 (2016): 486-509.

Testimony Focusing on: Missoula County Elections Office, Ballot Tabulators April 26, 2022
Crowdlaw for Congress Strategies for 21st Century LawmakingOctober 7, 2021
It Isn’t Just What You Say about Science; It’s Also How You Say It Teaching Scientists to Talk to Policy MakersSeptember 30, 2021