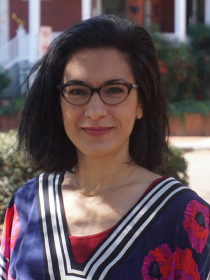 Ghandnoosh conducts and synthesizes research on criminal justice policies, with a focus on racial disparities in the justice system, public opinion about punishment, and the scope of reform efforts. She regularly presents to academic, practitioner, and general audiences and her work has been featured in outlets including the Washington Post, the New York Times, and WNYC’s On the Media. Ghandnoosh earned an undergraduate degree from the University of Pennsylvania and a doctorate in sociology from the University of California, Los Angeles.

How America Can Correct Systematic Racial Biases in Criminal Justice

Examines the evidence supporting second look reforms and presents in-depth accounts of three reform efforts that can be models for the nation: California's Assembly Bill 2942 (2018), allowing district attorneys to initiate resentencings, DC’s Second Look Amendment Act (2020), allowing those who committed crimes as emerging adults to petition for resentencing after 15 years of imprisonment, and New York State’s Elder Parole bill, which would allow people aged 55 and older who have served over 15 years in prison to receive a parole hearing.

Reveals significant variation across states in decarceration and highlights the overall modest pace of reforms relative to the massive imprisonment buildup. Following a nearly 700% increase between 1972 and 2009, the U.S. prison population declined 11% in the subsequent 10 years. At this rate of decline it will take 57 years — until 2078 — to cut the prison population in half.

Argues that since U.S. jails, prisons, and immigration detention centers are exceptionally susceptible to viral outbreaks such as SARS-CoV-2, substantial decarceration should be initiated, particularly for people older than 55 years who are especially at risk of severe COVID-19 and often pose little public safety risk.

Highlights initiatives in more than 20 states designed to address the four causes of racially unequal outcomes in the criminal justice system.

"Race and Punishment: Racial Perceptions of Crime and Support for Punitive Policies," The Sentencing Project, September 2014.

Synthesizes two decades of research revealing that white Americans’ strong association of crime with African Americans and Latinos is related to their greater support for punitive policies.

Profiles the experiences of three states – New York, New Jersey, and California – that have reduced their prison populations by about 25% in the past decade while seeing their crime rates generally decline at a faster pace than the national average.