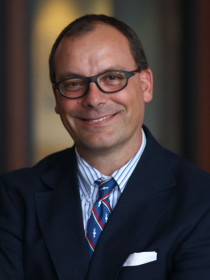 Royo's research focusses primarily on European and Spanish politics, comparative political economy, and international relations. He is Acting Provost and Professor of Government at Suffolk University in Boston, where he teaches courses in Comparative Politics, Latin American and European Politics, and International Relations. He also served as the Associate Dean on the Suffolk College of Arts and Sciences, and is Director of the Suffolk University Madrid Campus. Royo is an affiliate at Harvard University's Center for European Studies (CES), where he co-chairs the Southern Europe Study Group.

Lessons from the Spanish Banking Crisis

"War of Attrition and Power of Inaction: The Spanish Financial Crisis and Its Lessons for the European Banking Union" (with Miguel Otero-Iglesias and Federico Steinberg). Revista de Economía Mundial 46 (2017).

Examines the Spanish banking crisis and uses it to extract valuable lessons for the construction of the European Banking Union (EBU), which is a complex process that resembles, in some respects, the variety of actors and preferences encountered in the Spanish case.

"Portugal's Revolution and the Limits of Convergence" Portugal: Forty Years After the Revolution. Special Issue of Portuguese Studies 34, no. 1 (forthcoming).

Analyzes the impact of the Portuguese revolutionary transition to democracy on the country's economic policies and economic performance.

Explains why Spain experienced a full-fledged sovereign debt crisis and had to resort to Euroarea financial assistance for its banks, whereas Italy did not. Argues that the distinctive features of bank business models and of national banking systems in Italy and Spain have considerable analytical leverage in explaining the different scenarios of the crises in each country.

Outlines the main features of Spain’s growth model and the challenges it faced. Describes the scale of the shock it underwent from 2008 onwards and analyses the treble crisis in the financial, fiscal and competitiveness spheres. Concludes with some lessons to be learnt from the Spanish experience.

Examines the integration experience of Portugal in the European Union in order to study how it has affected the country's fiscal policies in the decade prior to the global financial crisis, from 1999 to 2008.  Focuses on three main variables to account for the difficulties that Portugal experienced in complying with the Stability and Growth Pact: institutions, ideas, and interests.