The Deportation Crisis for Latino Immigrant Men and Their Families

Immigrant rights activists are pressuring President Barack Obama to pull back on record-high deportations, pointing to the more than two million forced removals that have happened on his watch. Two million is a significant milestone, because it means that President Obama has already presided over as many deportations as President George W. Bush carried out during his entire two terms as president. Before that, the sum total of all immigrants deported prior to 1997 added up to two million, so Bush and Obama have vastly accelerated forced removals. 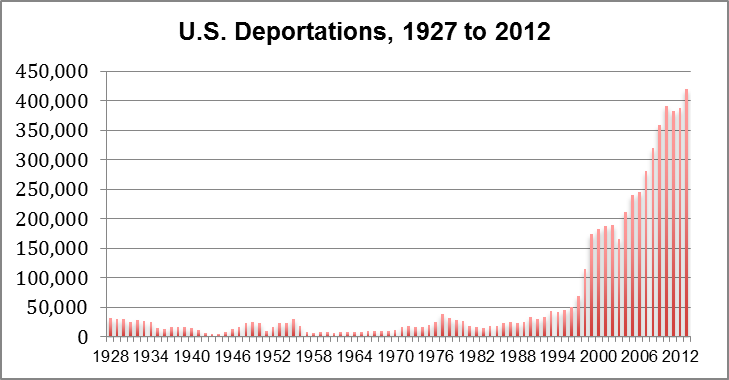 As deportations reach an all-time high, research I have done with Pierrette Hondagneu-Sotelo finds that they are overwhelmingly targeting Latino men, many of whom have lived with families across the United States. Mass removals heavily focused on a specific segment of the immigrant population are causing major social disruptions with lasting consequences.

A Regime of Mass Deportation

What explains the extraordinary recent increase in immigrant removals from the United States? Laws regarding deportation have not changed substantially since 1996, and the volume of immigration has remained relatively stable in recent years. Deportations have skyrocketed in close relationship to the huge growth in the budget of the Department of Homeland Security. The department’s fiscal year 2011 budget was $56 billion, with between a third and a half devoted to border security and immigration enforcement. To put this in perspective, the 2011 budget of the Department of Education was $77.8 billion, and the Department of Justice got $29.2 billion.

Burgeoning budgets lead to more agents deporting many more immigrants – not just people turned back at borders, but also undocumented people and legal permanent resident immigrants rounded up while living with their families in communities spread across the United States.

Federal authorities have been able to deport more people from the U.S. interior through cooperation with police. With only 20,000 employees overall – only a quarter of whom are available for raids at homes and worksites – the federal Immigration and Customs Enforcement agency lacks the capacity to patrol the streets of U.S. cities and locate non-citizens eligible for deportation. But under “Secure Communities” and related programs, police and sheriff officers can do routine immigration checks while writing speeding tickets. If the driver has a standing deportation order, deportation of a “fugitive alien” can occur. If the driver who is stopped happens to have a prior conviction for possession of marijuana, the result can be the deportation of a “criminal alien.” Or if the driver overstayed a tourist visa, deportation of an “illegal alien” may ensue. Official reports rely on dehumanizing labels to imply that removals make America safer. But more than four-fifths of deportees committed only non-violent offenses such as misdemeanors or failing to report for immigration hearings.

The Consequences of Targeting Latino Men

Recent mass deportations have targeted particular kinds of newcomers. Although Asians and Europeans make up about a quarter of undocumented immigrants in the United States, over 97 percent of deportees are from Latin America or the Caribbean. And despite the fact that about half of all undocumented immigrants are women, about 90 percent of deportees are men. The gender skew happens because police officers are more likely to stop men. As men are removed, women and children are left behind. Deportations abruptly deprive Latino working families of male breadwinner wages that may have been meager, but were nevertheless critical. Female partners respond by trying to work two or three jobs, reducing their time to care for the very young and the infirm. Mass deportation has thus torn apart and undermined many of America’s Latino families. Already, the first decade of the twenty-first century has become a period when hundreds of thousands of Latino men have been sent back to their countries of birth, leaving children and partners struggling. Affected children, mostly citizens, are growing up not only in greater economic privation, but also knowing that the U.S. government is responsible for exiling their fathers. The harm to their future, and to America’s, is bound to be great and lasting.

The Supreme Court May Have Just Made Violence against Immigrant Children More LikelyFebruary 28, 2020
How to Prepare Social Workers to Serve Families and Communities in an Era of Uncertainty and InjusticeOctober 25, 2019
Americans are Complicit in Border Camp Abuses August 7, 2019