Scholars have long recognized that higher education brings knowledge and skills that translate into economic gains and enhanced political engagement, but little attention has been paid to the shifting impact of U.S. policies on college attendance by men and women. Once a male bastion, American higher education has become much more welcoming to women since the mid-twentieth century. Starting in 1981, women earned the majority of bachelor’s degrees, and by 2003 U.S. colleges enrolled 1.3 women for every man. During the academic year 2012-13, women constituted a remarkable 57% of all U.S. college students.

Prior to the mid-twentieth century, U.S. public policy offered limited support for those hoping to pursue postsecondary education. During the Great Depression, the National Youth Administration’s work study program provided modest help to students already enrolled in college or vocational programs, but as of 1940 higher education remained largely an elite pursuit. The era of mass access emerged as the 1944 G.I. Bill helped more than 2 million returning World War II veterans to attend college or pursue vocational training. For the first time on a large scale, college doors opened to offspring of middle- and lower-income families. But 97% of the beneficiaries were men, so the G.I. Bill actually widened the college gender gap.

To attend college, women without access to the G.I. Bill needed private resources, yet families often devoted more resources to sons on the grounds that young women would likely waste their education by exiting the labor force upon marriage or after having children. Female students also faced limited opportunities to work, exclusions from private scholarships, and discriminatory quotas in college admissions. In 1964, for example, 21,000 women who applied to colleges in the state of Virginia were denied admission, even as all male applicants were admitted.

Given all of these barriers, it is hardly surprising that fully one-third of high-achieving women from low-income families were unable to enter college between 1945 and 1960, compared to only ten percent of high-achieving, low-income males who could not attend.

Beginning in the late 1950s, U.S. lawmakers passed landmark programs that ended up greatly advantaging college-ready women – in a kind of one-two punch against discrimination. 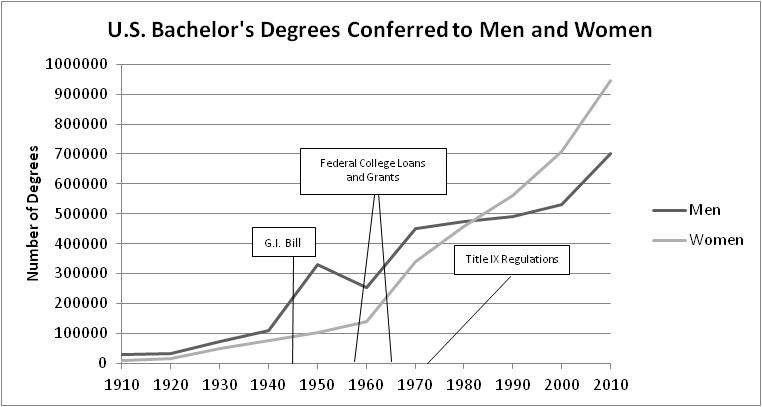 The first blow came from gender-neutral student loans and grants. For the first time, the National Defense Education Act of 1958 made college loans available to women, tens of thousands of whom soon pursued degrees. The Higher Education Act of 1965 expanded loans and authorized Pell Grants for very needy students. Over the next five years, more than two million women and men used such aid to pursue degrees, with millions more soon to follow.

According to data from the U.S. Department of Education’s National Postsecondary Student Aid Study, women got more from federal aid programs starting in the 1980s. A 2008 survey showed that older cohorts of men got most federal college aid until the effects of the G.I. Bill waned; but for Americans who were between the ages of 18 and 35 in 2008, 58 percent of women got some type of federal student aid, compared to 46 percent of men.

Extra college aid matters. Statistical analysis suggests that men and women alike who use federal student loans are 15 percent more likely to complete a four-year degree. As for Pell Grants, men who use these need-based grants are 12 percent more likely to earn bachelors’ degrees, while women’s degree attainment increases a bit less, by eight percent.

The second federal punch against gender equality came through regulations. By the early 1970s, federal aid made college more affordable, but females still had to gain admission. Invoking conventional wisdom about men as principal family breadwinners, many institutions required successful women applicants to have higher grades. But Title IX of the 1972 Education Amendments challenged barriers to women’s equal inclusion, with dramatic effects at the graduate as well as undergraduate level. Before Title IX, for instance, women received only nine percent of medical degrees and seven percent of law degrees conferred in the United States, but by 1997 the respective percentages shot up to 38 and 43 percent.

Taken together, egalitarian changes in U.S. financial aid and national regulations paved the way for women to overtake men in earning basic college degrees. Indeed, by equalizing access to higher education, federal policies after the mid-1950s gave a huge boost to women’s capacities as earners and politically engaged citizens, helping them to become full contributors to American democracy.

Read more in Deondra Rose, “The Development of U.S. Higher Education Policy and Its Impact on the Gender Dynamics of American Citizenship,” PhD dissertation, Cornell University, 2012.

Is Academia Inclusive? Voices from Mid-CareerAugust 9, 2019
Nondiscrimination on the Basis of Sex in Education Programs or Activities Receiving Federal Financial AssistanceJanuary 28, 2019
Why It is Time to Take Seriously the Political Power of Women College AthletesMay 30, 2018