Debates about the wisdom of hiking minimum wage levels are stuck in a rut. Opponents say higher minimum wages kill jobs, while supporters maintain that higher minimums reduce poverty and spur consumer spending, benefitting everyone. Many if not most economists believe both arguments to be true: higher minimum wages do indeed cost some jobs, but they also raise the standard of living for large portions of the population.

Evidence from Many Nations

To measure well-being, we turned to a 2013 Gallup report that probes the economic wellbeing of people in 24 industrial democracies around the world. Gallup measures the share of each country's populating that is financially "thriving" (as opposed to "struggling" or "suffering") by combining answers to questions about whether people have “enough money” to do needed things and “how often” they “worry about money.” Financially thriving respondents are those that "are generally satisfied with their overall standard of living" – and we created a graph to portray the relationship between the percent of each nation’s population that are thriving and the level of its minimum wage (standardized to take variations in the cost of living into account). 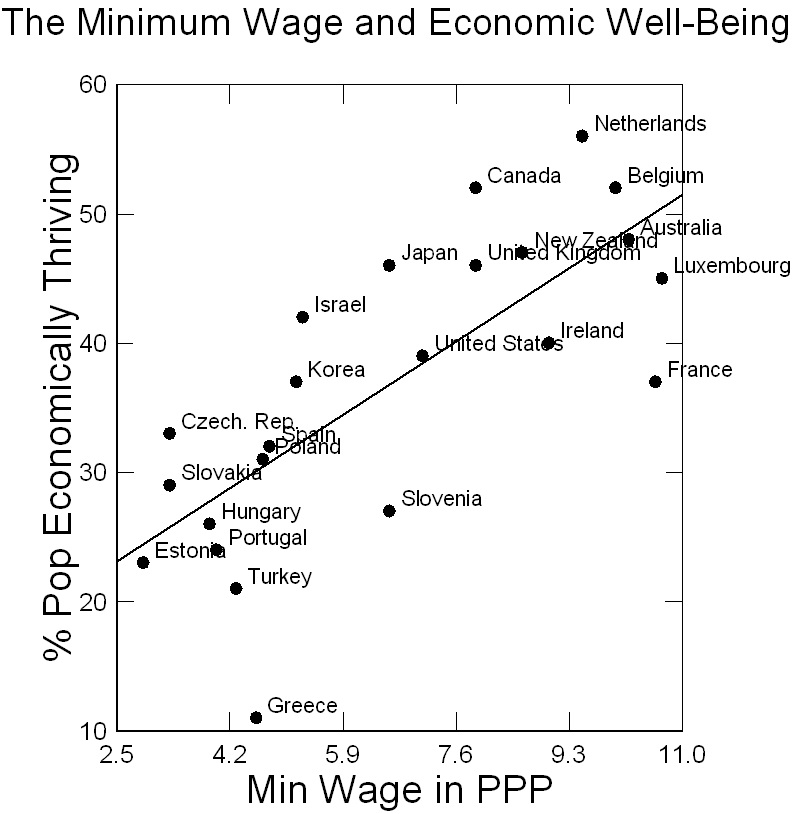 Our graph includes the regression line to show the overall positive relationship between minimum wages levels and the financial wellbeing of people in various nations. Simply stated, as the minimum wage increases, the economic wellbeing of the national population rises. Statistically speaking this relationship is a strong one, significant at the .001 level.

Some obvious questions about our finding come to mind. Wouldn’t wealthier, more developed nations tend to have both higher average financial wellbeing and higher minimum wages? And wouldn’t nations with low unemployment levels have higher financial wellbeing regardless of their minimum wages? To make sure that these factors did not weaken our findings, we controlled for them statistically. Even after we took into account countries’ levels of economic development as measured by Gross Domestic Product per capita and unemployment rates, we still found the strong, positive relationship between minimum wages and overall financial wellbeing. The data we used for this further analysis came from the 2013 World Fact Book of the U.S. Central Intelligence Agency.

We also find the same results if we examine data over a longer time period, presuming that current conditions reflect not just the immediate level of the minimum wage, but its longer term average. Across many industrial nations, the financial wellbeing of the population is also strongly predicted by the average minimum wage from 2000 to 2009. Again, the relationship holds even if we take levels of development and unemployment rates into account.

Our analysis includes only industrial democracies that have a statutory minimum wage. What about the small number that do not have such a legal measure? In those countries – mainly in Scandinavia – labor unions represent such a large portion of workers that the setting of a minimum earnings rate is left to the confederated unions to negotiate with business. Almost always, this approach to setting wages leads to higher minimum earnings than are found in countries with statutory minimum wages (which tend to substitute for strong unions as a device to push wages up). Not coincidentally, countries with strong labor movements also tend to have the highest levels of human wellbeing. Using the data we deployed, the three countries in the world with the highest levels of financial wellbeing are Sweden, Austria, and Denmark, all countries with strong unions and high de facto minimum earnings. In Denmark, for example, labor unions have pushed for and won an effective minimum wage of about $20 per hour. If we were to include these countries in the analysis by including their de facto minimum earnings, the relationships we reported would be even stronger.

Here’s the bottom line: Regardless of the size of a country's economy, its current economic situation, or the time frame chosen, people lead better lives as the minimum wage increases.

Although correlation does not prove causation, the evidence we have assembled strongly suggests that higher minimum wages do indeed work to the financial betterment of society as a whole. Even if some low-wage jobs disappear as minimum wages rise, the end result is greater economic security and prosperity overall for people who live and work in countries with the higher minimums.

Data for this brief were drawn from Gallup – Healthways Global Well-Being Index, “State of Global Well-Being,” 2013; the Organisation for Economic Co-Operation and Development; and the 2013 CIA World Fact Book.

The Misleading Case for Unmanaged Global Free TradeJanuary 13, 2015
Funding Workforce Development in the Infrastructure BillApril 16, 2021
Why Street-Vendor Relocation Policies Need To Be RethoughtOctober 16, 2019