March 17, 2022 marked three years since a large industrial accident at ITC, the Intercontinental Terminals Company. ITC blanketed the sky over Houston, TX with a plume of thick smoke for a period of three days. The plume was visible for dozens of miles and the fire released over 7,500 tons of toxic pollutants in benzene, xylene, and toluene, prompting local authorities to issue a shelter-in-place order to protect nearby residents from this dangerous exposure.

Unfortunately, the ITC incident was not the first or last that affected Texas. These kinds of accidental releases of pollution (“upset” or excess emissions) happen regularly in Texas and other parts of the country where large industrial facilities are located. However, for decades, the Environmental Protection Agency (EPA) has remained unaware of the amounts of excess emissions released due to under-regulation, and the lack of adequate data collection and transparency has only exacerbated the problem. In response to public outcry, the EPA has taken some important steps to tighten excess emission rules. But to fully ensure the health and well-being of our communities, both federal and state regulators need to develop comprehensive record keeping systems that fully capture the impact of emissions so that policymakers and the public can better understand the scope of the problem.

Excess emissions are releases of pollutants that occur during periods of startup, shutdowns, or malfunctions and exceed a facility’s routine emissions from normal operations. While these emissions are classified as violations of the Clean Air Act, they have largely escaped enforcement scrutiny by federal and state authorities for decades. Compounding this issue, we know very little about the frequency and magnitude of excess emissions across the county, because the vast majority of state environmental agencies either do not keep track of excess emissions or do so in a way that does not facilitate their systematic analysis (i.e. paper based records, fragmented record keeping).

Texas is the only state in the country that has detailed reporting and record keeping rules requiring industrial facilities to report excess emissions promptly and systematically to the Texas Commissions of Environmental Quality. This reporting system has allowed our research group to carefully examine both the patterns in the frequency of excess emissions and their impacts to human health and the environment. From our analysis, we found that: 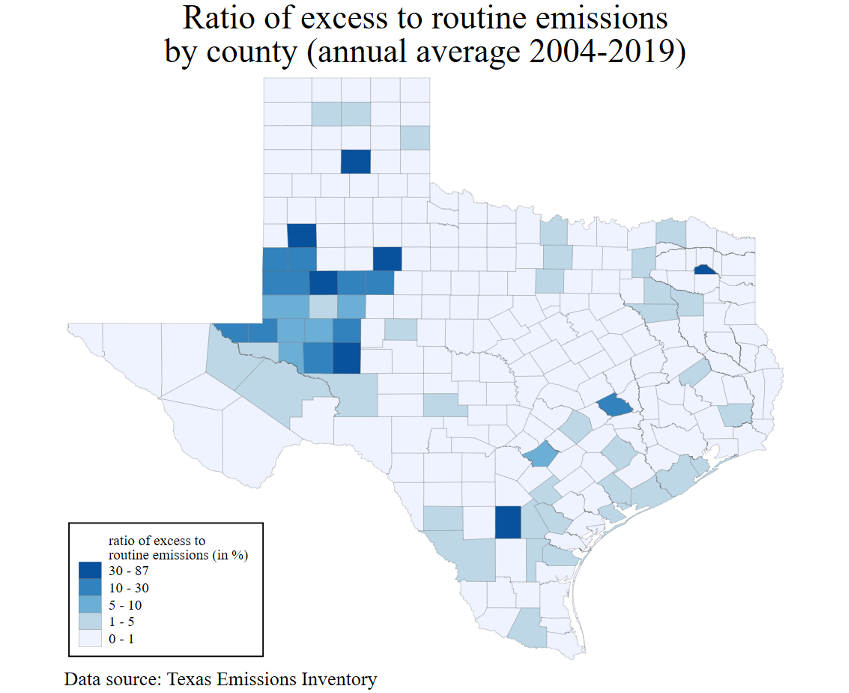 Outside of Texas, few states keep systematic records of excess emissions in a manner that would allow community members, decision-makers, and researchers to discern the environmental and health impacts of those releases. Without access to that information, the EPA and state agencies are likely underestimating the total amount of pollution that people in the United States are exposed to. In fact, the EPA’s own National Emissions Inventory does not account for excess emissions across the country—or even within Texas, where state level data are available. Without accounting for excess emissions, current pollution exposure studies are significantly underestimating health damages.

Between 2017-2020, the EPA under President Donald Trump took a series of steps to weaken the regulatory framework that determines whether firms should be penalized for excess emission releases. The culmination of that process came with an October 2020 EPA memorandum that authorized states to provide various enforcement exemptions for excess emissions. Those policies represented a deregulatory effort that was not evidence-based and did not consider the impacts on air quality and people’s health. In short, the agency made decisions during this era that were not aligned with its mission to protect human health and the environment.

Since 2021, the EPA has taken concrete steps to reverse the deregulatory efforts of the previous era and re-align federal policy with the Clean Air Act that classifies excess emissions as violations. Specifically, in April 2022, the EPA proposed a rule that would reverse the guidance of the October 2020 memorandum, and eliminate the ability of state agencies to offer enforcement exemptions for excess emissions. These steps are important and need to be acknowledged as the start of an effort to design an effective regulatory framework for excess emissions. However, more needs to be done at both the federal and state levels, beginning with data collection and availability. The EPA and state environmental agencies need to develop systematic and detailed record keeping systems that not only collect information about excess emissions, but, more importantly, make that information available to the public in a meaningful way. Doing so is a necessary step to design an effective regulatory system that governs a complex aspect of industrial activity and safeguards the health and well-being of our communities and the environment.