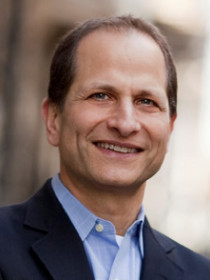 Lee Wasserman has served as Director of the Rockefeller Family Fund (RFF) since 1999. RFF has consistently influenced national policy through recognition or development of important program opportunities, strategic advocacy, and citizen engagement. Lee’s work has led to creation and implementation of initiatives to address climate change; advance women’s economic interests; and expand citizens’ ability to influence their democratic institutions. Prior to joining RFF, Lee was Advisor to The Pew Charitable Trusts where he designed and implemented major program initiatives. From 1988 to 1995, he served as executive director of Environmental Advocates of New York, a statewide organization, where he developed and helped pass several landmark environmental and health measures. Lee ran for the U.S. House of Representatives in 1996 from New York’s 21st Congressional District. Earlier in his career, Lee served as Assistant Counsel to then Speaker of the New York State Assembly, Stanley Fink. He also served on Governor George Pataki’s Transition Team. He is a board member of Environmental Advocates of New York, a trustee of the Blanchette Hooker Rockefeller Trust, and a past president of the Environmental Federation of New York. Lee is a graduate of Union College and Albany Law School. He received the 1993 Outstanding Young Alumnus Award from Albany Law School and in 2012 was admitted into Schenectady High School’s Hall of Fame in recognition of his professional achievement.