Half a century after the civil rights movement, major racial economic disparities persist in the United States. In fact, the gap between white and black family incomes has not narrowed at all since the 1960s. The lack of progress toward racial economic equality is dispiriting, given extensive legal and social efforts to reduce discrimination. But the appearance of stasis is also misleading because it results from two offsetting trends that have negated each other.

Over the past five decades, many African Americans have climbed to higher positions on the income ladder. But such progress came just as national economic and political shifts were tilting the economy towards the rich, reducing the benefits of middle-class status just as African Americans were entering this stratum in increasing numbers. Decades-long U.S. income shifts had the effect of undoing what would otherwise have been real progress towards income parity for blacks and whites. Unpacking these cross-cutting trends highlights the futility of addressing racial and economic inequality separately.

Income disparities between blacks and whites have hardly changed since the 1960s. In 1968 the median African American earned 57% as much as the median white American, and in 2016 the ratio was 56%. Mean income trends are similar. 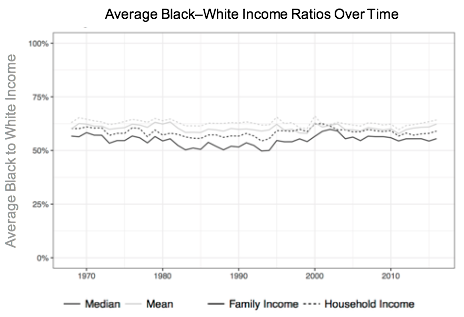 But this overall stability masks two opposed trends. From 1968 to 2016 African Americans moved steadily into higher ranks in the income distribution. As shown below, the median African American had an income at the 25th national percentile in 1968 – indicating that only one quarter of the country earned less than the typical black person. By 2016 the black median had climbed to the 35th percentile, narrowing the gap between blacks and whites by almost a third. This progress came despite continued racial disparities in parental wealth, access to educational resources, and treatment in the labor market.

However, moderate progress towards equality for blacks and whites in rank terms was undone by changes to the U.S. economy at large. Starting in the 1970s, changes in the U.S. economy and public policy began concentrating a larger and larger share of national income in the pockets of the richest members of society. Incomes for the middle class and the poor have stagnated.  Indeed, after adjusting for inflation, the average post-tax incomes of the lower half of society grew by just 39% from 1968 to 2014, as incomes for the richest one percent almost tripled.

What Must be Done

Clearly, racial and economic inequalities are fundamentally intertwined. During the last 50 years, improvement in the relative position of African Americans was counteracted by national economic shifts undercutting prospects for all middle-income people, as wage stagnation and rising inequality have harmed Americans of all races.

If African Americans have been especially undercut by rising inequality, they stand to gain disproportionately if the U.S. economy can be made more equitable by universal, race-neutral policies – such as a federal jobs guarantee and higher minimum wage, universal child allowances, and greater antitrust enforcement to allow small enterprises to grow. Such policies could have broad popular appeal – and they could finally reduce stubbornly persistent racial economic gaps.