The Best Way to See That Affordable Care is Moving Ahead

Opponents declared Affordable Care a failure even before its core parts took effect on January 1, 2014, and the national media is full of Perils-of-Pauline coverage exaggerating every glitch. Hardly a day passes without headlines pronouncing doom for reform and its Democratic proponents. In a time of partisan polarization and 24-hour news, it’s just too easy for most observers to treat the implementation of this epochal reform as a national political horse-race.

But it is no such thing. Realistically, calls for repeal are mostly hot air. Like Social Security and Medicare before it, Affordable Care will go into effect over many months and years, with controversies and adjustments along the way. Assessment of important effects will take time. Right now, implementation rests heavily with officials, citizens, businesses, and health care providers in the fifty states. The best way to track reform is by comparing states acting in good faith to those engaged in delay or obstruction.

The March 2010 Affordable Care legislation called on the states to tackle two major tasks. They are supposed to enlarge pre-existing Medicaid programs to cover more low-income people, and they are supposed to set up and manage “exchange” marketplaces where residents can compare private health insurance plans and learn about eligibility for subsidies to help them pay premiums. In June 2012, the Supreme Court bolstered state authority by ruling that state officials may decline to expand Medicaid without any loss of prior federal funding.

Political realities have spurred many governors, especially conservative Republicans, to decline the Medicaid expansion and wash their hands of the exchange marketplaces. Officials at Health and Human Services had to hastily cobble together a national website, “Healthcare.gov,” to apply diverse rules and allocate enrollments to dozens of states. In October and November of 2013, the feds bungled the initial effort; only in December did their website start working well. We all know that story, but to learn more we need to track implementation in the states – where some officials are playing the roles assigned by law, while others have torn up the script.

Using state-by-state data compiled by Charles Gaba through January 4, 2014, I benchmarked Medicaid enrollments and purchases on the exchanges to goals previously set for each state by experts at the Congressional Budget Office and the Kaiser Medicaid Commission. (For Hawaii, Medicaid data was missing, so I omitted it from the average in its category.)

My analysis reveals that major progress is already happening in fourteen Full-Go states, where officials are expanding Medicaid and running their own exchanges. Enrollments are happening more slowly in states where leaders accept all or part of reform but rely on the federal website and were hindered by its start-up woes. Across the board, enrollments are minimal in states where authorities refuse to expand Medicaid or encourage exchange enrollments. 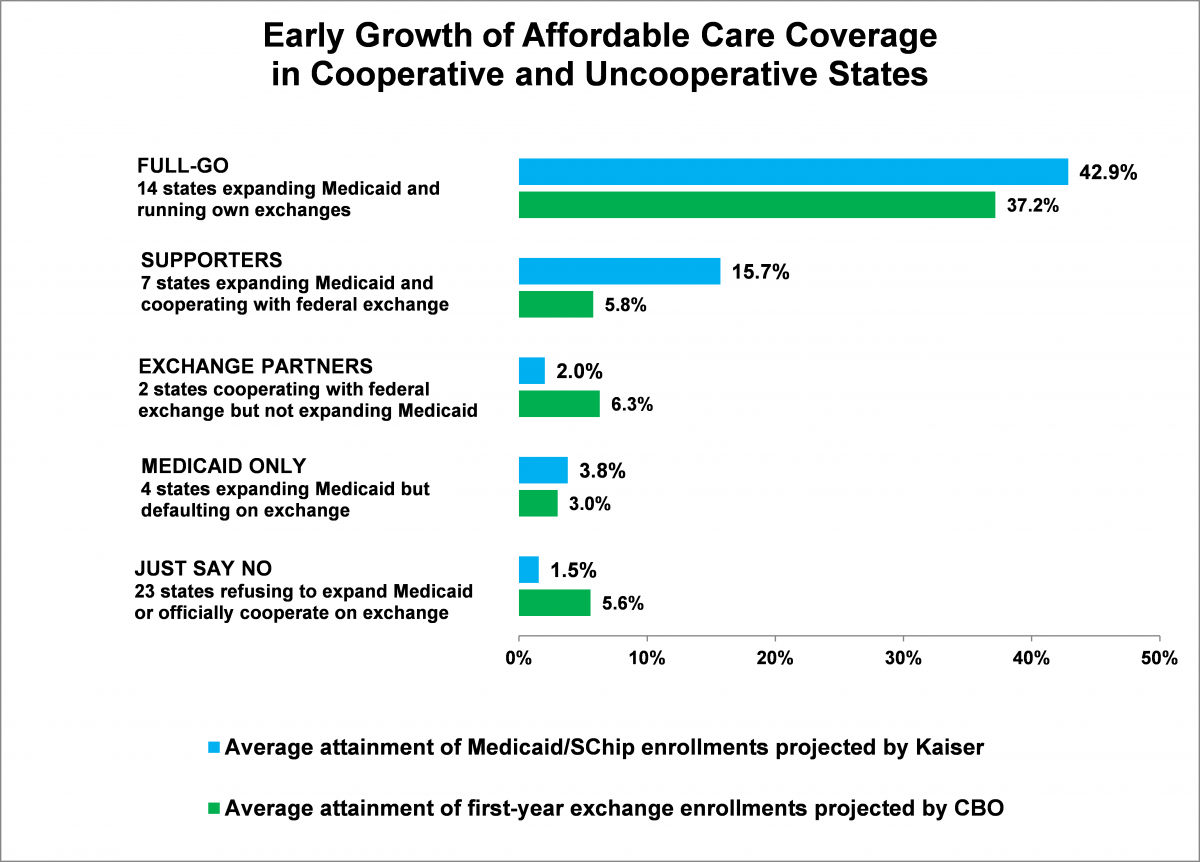 To be sure, quiet cooperation by lower-level administrators is happening in a number of officially non-cooperative states; and several Full-Go states experienced early difficulties with exchange enrollments. Furthermore, the numbers are bound to change as the federal government issues additional reports. As of the very start of 2014, however, it is notable that Affordable Care is moving forward by far the most rapidly and substantially in the states where officials wholeheartedly support reform and are deploying their own administrative capacities.

By design, Affordable Care depends on good-faith support from elected state leaders working with businesses and citizen groups. To track successes and shortfalls, we must look closely at the states and pay special attention to those where all hands are willingly on deck. Premature naysayers should not be allowed to detract attention from the numerous states – located on the coasts and in the heartland – where reform is steadily moving forward, proving that it can help millions of Americans gain access to reliable and affordable health care. Widespread state-level progress proves that Affordable Care can indeed work well.

Data come from Charles Gaba/Brainwrap compilations through January 4, 2014; from the December 2013 Kaiser report on state decisions on exchanges and Medicaid; and from projections in Table 9 of the November 2012 report of the Kaiser Commission on Medicaid and the Uninsured.

How Protecting Pets Can Help Victims of Domestic ViolenceJuly 10, 2019
How Republican Under-Enrollment Has Made Affordable Care Marketplaces More ExpensiveJuly 10, 2019
Understanding the Dynamics of Medical Marijuana Legalization in the United StatesFebruary 26, 2019