Over the last decade, the transportation of domestically produced crude oil from oil fields to refineries has generated intense policy debate – mostly focused on a small number of rail and pipeline spills and accidents. Less attention has been paid to the ways in which crude oil transportation generates environmentally costly air pollution and greenhouse gases. Yet railroad locomotives burn diesel fuel, while pipelines use electricity to pump crude oil, much of it produced at coal-fired power plants. Two questions need to be posed and answered: How big are costs of spills and accidents for crude oil transport by rail versus pipelines? And how substantial are the costs of air pollution and greenhouse gasses generated by rail versus pipeline transportation of crude oil?

The Costs of Spills and Accidents, Air Pollution, and Greenhouse Gases

Costs of spills and accidents encompass cleanups and efforts to deal with harm to human health. Calculated in terms of million barrel miles, the estimated cost of spills and accidents is $62 for pipelines and $381 for rail. Rail costs are much higher because pipelines are mostly laid through thinly populated areas; and pipelines are less likely to experience a very expensive disaster in terms of lives lost or property damaged.

Air pollution costs include effects on human health, crop and timber yields, degradation of buildings and material, and reduced visibility and recreation.

Costs of greenhouse gas emissions are borne throughout the world. Before it was recently disbanded by President Trump, the Interagency Working Group on Social Cost of Greenhouse Gases estimated the social cost of carbon in 2013 using numbers that reflect “changes in net agricultural productivity, human health, property damages from increased flood risk, and the value of ecosystem services due to climate change.” For pipeline transport of crude oil in particular, the total air pollution and greenhouse gas cost per million barrel miles is $531, while the cost is $1,015 for rail transport. For pipelines, the air pollution cost is $273 and the carbon dioxide cost is $257, while the air pollution cost of rail transport is $814 and the carbon dioxide cost is $201. The external costs for rail are higher than pipelines for spills and air pollution but lower for greenhouse gas emissions. Air pollution is by far the largest rail cost, because air pollution increases mortality risks. 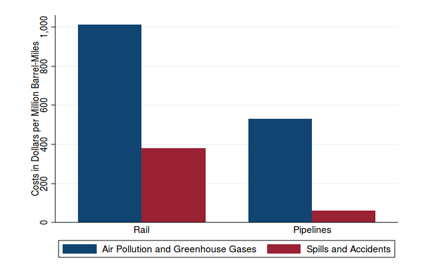 Rail transport of crude oil has declined since a peak in 2014 and is likely to further decline as the Dakota Access Pipeline is opened. Nevertheless, high volumes of similar products are still transported – ethanol, butane, propane, isobutane, and processed petroleum products.

In practice, could incentives for firms shift enough to speed such changes? Although it is difficult to implement taxes that cause firms to pay the full social costs, there are alternatives:

What the U.S. Government Can Do to Address Energy Insecurity March 24, 2021
Evidence-Based Solutions for Addressing Energy InsecurityFebruary 11, 2021
How Fisheries Can Test Management Rule Changes Before Enacting Them February 9, 2021