U.S. state preemption laws forbid or limit local governments from creating legislation, such as antismoking ordinances or mandated nutrition labeling on restaurants menus. As various researchers and journalists have documented, conservatives prod state governments to enact such laws in order to block the legislative agendas of liberal-leaning city governments.

These laws are spreading without much public attention. Recently, some public health researchers have warned that preemption laws can prevent steps that might improve public health. But are these concerns justified? Have U.S. states that have enacted preemption laws actually fallen behind in population health – and do their have lower life expectancy than residents of other states?

A Brief History of Preemption and Its Controversy

To give examples in areas where many states have acted, Virginia and Michigan preempt local smoke-free ordinances; Florida forbids localities from requiring nutrition labeling in restaurants, food stores, and vending machines; and Wisconsin and Mississippi prevent localities from requiring that employers offer a minimum of vacation or sick days, paid or unpaid. Almost one-half of all states, moreover, have some form of preemption dealing with the minimum wage.

Policymakers debate whether preemption is legitimate or nefarious – and disagree about consequences for population health. One way to glean new insights involves categorizing preemption laws into two groups. “Ceiling” laws forbid local laws (such as smoke-free ordinances) that can be expected to enhance health, while “floor” laws prevent localities from enacting laws that might harm health (such as laws that ease tobacco restrictions).

An increase in ceiling preemption laws since the 1980s may harm health. For instance, life expectancy in New York versus Mississippi differed by just 1.6 years in 1980. But the gap has since grown to 5.5. years, as Mississippi has preempted local health-enhancing steps such as paid sick days, minimum wage hikes, stricter firearm regulations, and rules that require posting of calorie counts, while New York has not used preemption in any of these areas. 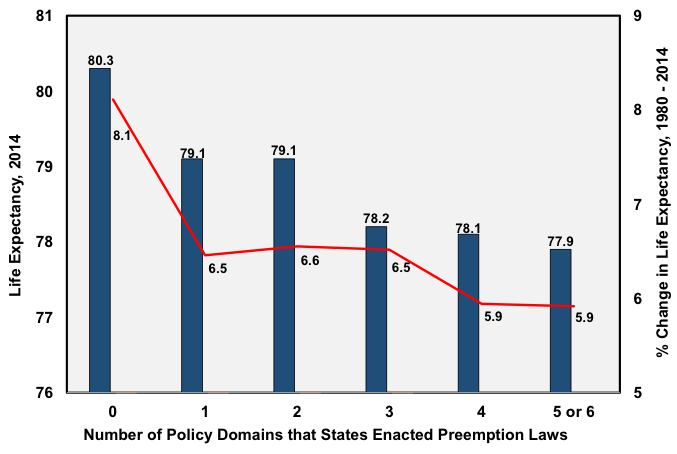 Although this first look is striking, it is just a correlation. Because states vary in many ways, in-depth analysis is needed to pinpoint how much of the association is causal. Nevertheless, it is hard to avoid concluding that the states that use preemption the most are the very ones whose residents have the most to gain from initiatives that preemption laws block.

Research, Recognition, and Reframing are Needed

State preemption is an underappreciated threat to population health. U.S. states are increasingly diverging in life expectancy and, so far, most research on the growing gaps has focused on individual lifestyle “choices” such as smoking or drug use. The possible harmful or helpful health effects of states policy decisions have not received the attention they deserve.

Policymakers and the public must recognize the potential health consequences of state laws that keep local jurisdictions from enacting laws to make their residents healthier and safer. If preemption laws harm life expectancy, then health concerns should be front and center when state legislators debate these laws. What is more, as Americans look for ways to move beyond partisan polarized debates, focusing on the anticipated impact of state preemption laws on population health could be one way to make real progress. Scholars have more to learn but, so far, there are many indications that when states restrict local governments through ceiling preemption laws, they may also hurt people’s chances to live longer and healthier lives.

Should Marijuana Policies Criminalize Use or Reduce Harm?September 28, 2016
Closing the Racial and Ethnic Gap in Housing Insecurity Among Families with Children in New York CityAugust 20, 2022
Centering Health in Designing NYC’s New Borough JailsAugust 20, 2022