Income inequality in the United States has been on the rise since the 1970s, with the wealthy taking a growing share of national earnings. However, this increase has not played out the same way in all 50 states. Economic gaps have widened in some states much more than in others. We focus on differences in the redistributive policies that states adopt to help explain this variation among states. Using data on state policies and trends in income inequality from 1980 to 2005, we show that tax policies, labor market regulations, and programs for the poor can make a real difference in income inequality.

The Impact of Equality-Enhancing Policies in the U.S. States

Taking into account many social and economic factors known to affect inequality, we measured the impact of four kinds of tax and economic policies on state-level trends in the income share of the top one percent and in the overall distribution of income (measured in a standard way using Gini coefficients). Both of these measures capture “market inequality,” which indicates the gap in what people earn before accounting for government taxes and transfers. We found a relationship between market inequality and each approach to redistribution, as described below:

What Inequality Could Have Been

To see exactly how much of an effect state redistributive policy approaches have on income inequality, we simulated three hypothetical state policy regimes – to compare state policies in recent times to alternative packages of more and less equality-enhancing laws.

As the figure shows, if U.S. states had adopted less equality enhancing policies, the income share of the top one percent would have increased by more than 20 percentage points between 1980 and 2005. In reality, that share grew by 11 percentage points under the average state policies. But if states had pursued more equality-enhancing policies of the sorts we measured, then the top one percent’s share of income would have grown by only 1.6 percentage points – leaving states in a more equal economic direction than Americans have experienced in recent times. We found similar results using our Gini coefficient measure of trends in overall income distributions. 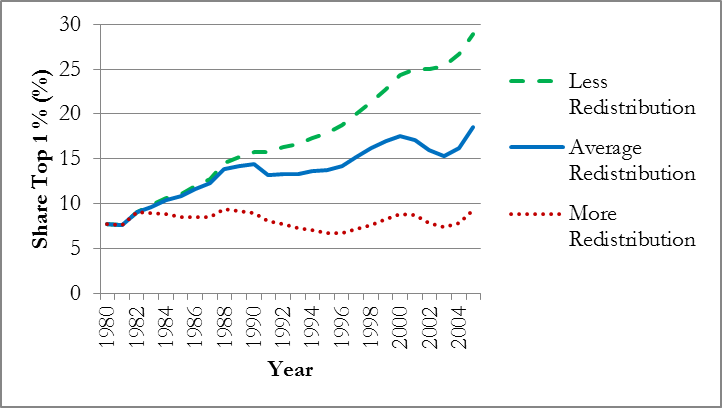 Our most surprising finding is that higher levels of state-level spending on the poor go hand in hand with greater income inequality. More needs to be learned about why this happens. Perhaps, poor people earn less in the labor market if they can qualify for more social benefits. State-level policymakers may still have good reasons to fund relatively generous social programs, but they should understand that the effect may be to increase inequalities in market earnings. The traditional view is that government can do the most to reduce economic inequality by using taxes to fund social programs. But our research underlines the importance of pursing taxes and regulations that can make market incomes more equal in the first place.

Why Street-Vendor Relocation Policies Need To Be RethoughtOctober 16, 2019
Why Updated Policies are Needed to Spur Modernization of America's Electricity GridFebruary 3, 2017
The Misleading Case for Unmanaged Global Free TradeJanuary 13, 2015