Latino Support for Rights Movements in the Age of Trump

When Donald Trump called Mexican immigrants “rapists” and “criminals” as he launched his presidential campaign, he sent shockwaves throughout the U.S. Latino community. Arguably, Trump as candidate and then president has punitively targeted Latino immigrants more openly, more directly, and more often than any other segment of the American society. Trump has signed executive actions targeting Latinos, promised to build a border wall to keep them out, and pardoned a sheriff criminally convicted of racially profiling them. The Trump administration has also attempted to end the popular Deferred Action for Childhood Arrivals program – often called DACA for short – that granted legal status to hundreds of thousands of undocumented youth whose parents brought them to the United States as children.

How have America’s Latinos, the county’s largest minority group, reacted to all this? Our research examines Latino support for immigrant rights activism. Using survey data, we also assess the degree to which Latinos back other rights movements, including the Black Lives Matter movement as well as lesbian, gay, and bisexual rights activism. 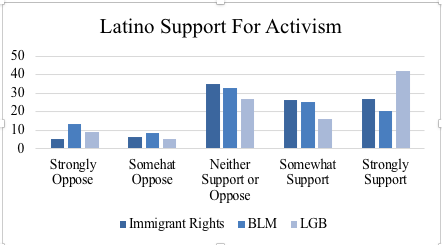 Latinos have a long history of participation in protests, marches, and rallies in support of immigrant rights, so it is not surprising that nearly 54% indicate some level of support for such activism. Furthermore, across the three areas we examine, Latinos expressed the lowest levels of opposition to immigrant rights activism. Indeed, 32% of Latino Republicans support activism on behalf of immigrants, though this level of support falls far short of the 59% support expressed by non-Republican Latinos. Given the direct impact on their lives, we were not surprised to find that foreign-born Latinos support immigrant rights activism at a higher level (63%) than Latinos born in the United States (50%). In the time of Trump, immigrant rights organizers should find comfort from such strong constituency support.

The Black Lives Matter movement began in 2013 as a call to mobilize against government-sanctioned violence towards African-Americans. Because the movement is framed around issues of racial justice and discrimination, Latinos might support it. But such support is far from certain, because biases exist in the Latino community against blacks and against fellow Latinos with darker skin tones. Our results indicate some degree of black and brown solidarity. Only 22% of Latinos expressed opposition to the Black Lives Matter movement, compared to a large plurality of 45% who expressed some support or strong support. When national origin is considered, 53% of U.S.-born Latinos support the movement compared to (a still solid) 41% of Latino immigrants. Latino Republicans were least supportive of Black Lives Matter, with about 50% being somewhat to strongly opposed. Nevertheless, this movement gets a lot of Latino support, even though it does not primarily focus on Latino-specific issues. If Black Lives Matter leaders want to expand their base, they may have potential allies among Latinos.

National attitudes towards lesbian, gay, and bisexual people have shifted considerably over time to become more positive and supportive of policies that expand their rights. Nonetheless, prior research has found that Latinos holding socially and religiously conservative views have expressed lower support for such rights. In light of these prior findings, we did not expect Latinos to express strong approval of gay, lesbian, and bisexual activism. But our survey results actually show that Latinos are quite supportive of contentious gay rights politics.

Only 14% of Latinos expressed any level of opposition to rights activism on behalf of gays, lesbians, and bisexual people, while fully 58% said they are somewhat to strongly supportive of such activism. Even more surprising was the degree to which Republican Latinos support this type of contentious politics. Indeed, more Latinos who identify as Republican (35%) support than oppose (31%) this kind of activism. In comparison, 64% of Latinos who do not identify with the Republican Party support this kind of activism. U.S.-born Latinos back this type of activism at a higher rate (62%) than foreign-born Latinos (46%). Yet the fact that nearly half of the foreign-born are supportive indicates solid acceptance of gay, lesbian, and bisexual rights activism.

If activists fighting for the rights of immigrants, African-Americans, and gays, lesbians, and bisexuals in the Trump era are to be successful, they must get considerable support from various politically relevant constituencies – including from Latinos, America’s largest racial minority group. The results of our survey questions suggest that this community is strongly supportive of progressive political activism. Our findings suggest that leaders in all three movements discussed here – Black Lives Matter, gay, lesbian, and bisexual rights, and immigrant rights – should invest in seeking the support of Latinos, not only because they are likely to get a sympathetic hearing but also because most U.S. Latinos are open to getting behind many movements for minority social rights. Given support for rights movements, we may also expect Latino voters to support public policies and candidates that seek to expand the rights and protections favored by current rights movements. Overall, there are many indications that the political clout of Latinos in the United States is likely to further both social movements and government policies aiming to improve the situations of vulnerable minority groups.

How to Help Unaccompanied Children from Central America—Ideas from the Washington, DC AreaJune 11, 2021
The Enduring Urgency of Black BreathMay 21, 2021
How Social Movements Build Power through IntersectionalityJune 5, 2019