Making Sense of the Koch Network

In recent years, two multibillionaire brothers, David and Charles Koch, have become major players on the political right, inspiring journalists and public interest researchers to comb through publicly recorded donations to depict a vast Koch network – as, for example, in the widely distributed “Maze of Money” chart created by OpenSecrets for the 2012 election cycle. In the current legal environment donations are often secret, so this approach necessarily misses money flows. Ironically, it also includes too many groups, ranging from longstanding conservative giants that get modest Koch donations to short-term fronts set up to write checks for attack ads.

Using information from SourceWatch and journalists, my research group on “The Shifting U.S. Political Terrain” focuses on enduring organizations created and directly controlled by the Kochs and their closest associates. Donations are not the key, because the Kochs have always collected resources from other donors, as they now do on a huge scale at twice-a-year “Koch Seminars.”

The chart in this brief arrays core Koch political organizations chronologically and functionally. Groups could be added and classifications debated, but the chart features the most important organizations and offers a coherent picture of the evolution of an overarching political strategy.

By now, the Koch network parallels, rivals, and leverages the Republican Party itself, both nationally and in most states. The aim is not merely to elect or appoint conservative Republicans, but also to prod them into carrying through an overarching agenda – to hobble the U.S. public sector by slashing taxes, removing regulations, and eliminating or privatizing social spending on health, education, and social security. 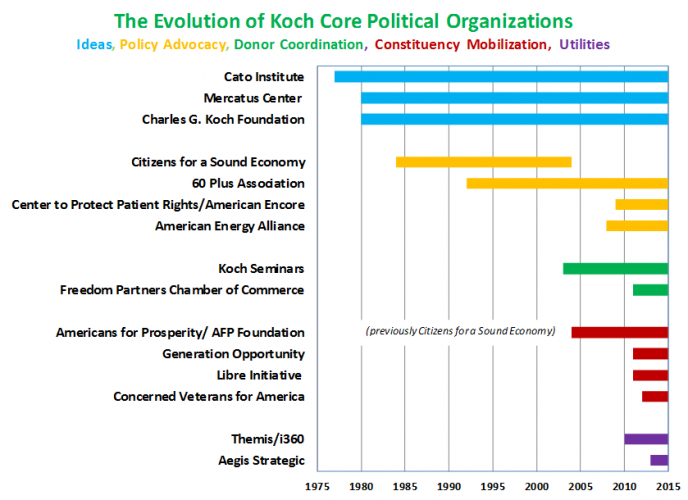