Social Security is America’s most effective and beloved social program – because everyone contributes and all families can count on it. Yet from Washington and Wall Street, we frequently hear that Social Security is “going bankrupt.” We are told that the program cannot be sustained in an era of tight federal budgets. The truth is very different. Social Security is funded by its own payroll taxes and does not contribute to the federal budget deficit. The program is ready to meet the needs of retiring baby boomers, and with minor adjustments, it can flourish long into the future.

Social Security is a Necessity, Not a Luxury

For over three-quarters of a century, Social Security has been the bedrock of economic security for American families whose breadwinners have retired from the workforce, died, or become disabled. When Social Security was created in 1935, about half of all elderly Americans lived in poverty, and most had little choice but to live with their adult children. Families that lost breadwinners due to early death or disability had to fall back on charity. Today those families can count on Social Security; and nine out of ten retired senior citizens are able to live in dignity, not poverty. In fact, the elderly are the only age group that has not experienced a rise in poverty since the Wall Street crash of 2008.

After paying into Social Security over the course of their working lives, two of every three retired workers rely on it for over half of their income. For one in three, a Social Security check is almost all they have to spend each month. And although no one likes to think about it, actuaries estimate that about four out of every ten young men, and three out of ten young women, will die or become disabled before reaching retirement age. Social Security needs to step in when adversity strikes, because few of us have sufficient individual savings to get by, or enable our families to get by, when disability or death strikes unexpectedly.

Social Security can pay all scheduled benefits for the next 25 years – and more than three-quarters of promised benefits for the 50 years thereafter. Workers and employers cover the cost of Social Security by paying payroll taxes into the Social Security Trust Fund. These payroll taxes do not pass through the regular federal budget and, by law, cannot be spent on other programs. If the rest of government borrows from the Social Security Trust Fund, it has to pay the money back – just like it has to pay back holders of other U.S. Treasury bonds. President Roosevelt designed it this way to protect workers’ retirement savings from Washington’s annual budget battles – or in his words, so that “no damn politician can ever scrap my Social Security program.”

Social Security Has Built a Nest Egg for Baby Boomers

Social Security’s actuaries plan its finances 75 years into the future. Each year they inform Congress about the long-term surplus or shortfall. Back in 1983, Congress addressed the long-term shortfall by slightly increasing payroll taxes and by gradually raising the retirement age to 67 by 2027. For nearly three decades, the baby boom generation has been paying much more into the program than was needed for current benefits. As a result, Social Security has stored up a whopping $2.6 trillion in worker savings to help pay for the baby boomers’ retirement in the coming years.

In sum, then: even though the share of elderly Americans will grow as boomers retire, the rising retirement age will soften the blow. Hence the cost of Social Security benefits will rise only modestly from 4.8% of Gross Domestic Product today to an estimated 6% in 2085. And boomers have saved up $2.6 trillion to help pay for it.

The federal government spends more than it takes in right now, and America’s $15 trillion debt will continue to grow if taxes are not raised and/or spending curbed. But Social Security is not the cause of the crisis. As the chart to the left shows, the federal deficit today – and even more so in the future – is driven mostly by the unaffordable Bush tax cuts of 2001 and 2003. 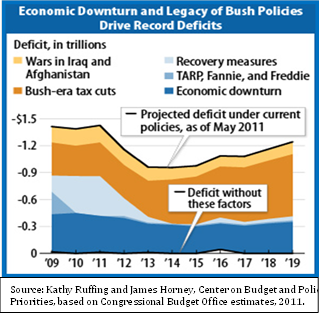 Costs from the wars in Iraq and Afghanistan also contribute – because the nation must take care of veterans long after the conflicts wind down. Another issue is the temporary strain put on the federal budget by the economic downturn starting in 2008 and slow growth since. This has caused revenues to plummet at the same time as the government has had to help the unemployed. Over the long term, the rising cost of our inefficient health care system is the main driver of the debt.

Social Security did not cause the federal budget mess – and it should not be dragged into the arguments over how to address the deficit crisis. Because Social Security has its own taxes and is in good fiscal shape, it would take only minor adjustments to ensure its solvency into the next century. And that is good news, because all Americans rely on Social Security to be there when they need it.

Understanding Community Acceptance of and Opposition to Homeless-Serving FacilitiesNovember 11, 2022
We Must Secure the Right to ContraceptionOctober 16, 2022
A Realistic Portrait of the Social Safety NetSeptember 1, 2022