Why Americans Can't See Government - And Why It Matters

When Americans think of “government social programs,” many imagine bureaucracies using taxpayer dollars to cut checks to poor people on “welfare” or to pay for Food Stamps. They do not think of student loans, the home mortgage interest deduction, or government subsidies to reduce the cost of employee health plans and retirement benefits. Yet such indirect social benefits channeled through the tax code or delivered as subsidies to private organizations have become at least as common as direct payments and services from government. Taken together, America’s many indirect social policies add up to the “submerged state,” a costly but hidden form of governance that has problematic consequences for U.S. society and democracy.

Submerged programs are hard to understand because at first glance many of them look like tax cuts, not social programs. But they don’t cut taxes for all Americans across the board; instead they single out people in special circumstances and offer them extra assistance – just like direct programs such as Food Stamps, subsidized housing, and welfare. The difference lies in how the government help is delivered. Instead of sending out checks or providing services to people, these hidden policies reduce the amount owed in taxes by particular people or businesses.

The Home Mortgage Interest Deduction is a good example. Originally a minor footnote in the 1913 income tax, this deduction has ballooned into a costly entitlement. Politicians often speak of the mortgage deduction as a benefit for middle class Americans. But the vast majority of the benefit goes to affluent people who own expensive homes and itemize their tax deductions.

Submerged Benefits are Costly and Increase the Federal Deficit

The cost of hidden social welfare benefits in the tax code adds up to $1.1 trillion per year, about 7.4% of the Gross National Product (GDP). These hidden benefits for households are more costly than corporate tax breaks, which cost less than 1% of GDP; and they also cost more than Social Security, equal to about 5% of GDP; or Medicare and Medicaid combined, which also cost about 5% of GDP. The huge cost means fewer resources to pay for much-needed programs that would do more to help lower and middle-income Americans. 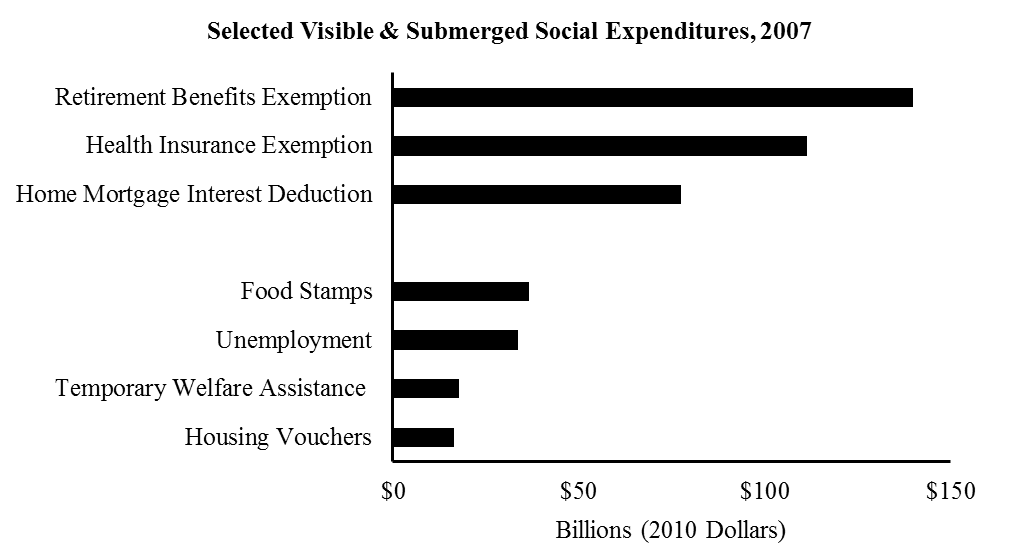 Hidden expenditures are not fair to businesses either. Some industries and firms get tax breaks and subsidies, while others get nothing or very little. That distorts fair market competition.

Through better policy design and communication, America’s political leaders can make it easier for citizens to perceive government’s true role in their lives. Experimental research shows that even small amounts of information can help citizens decide which programs meet their values and needs. The submerged state can also be made a lot fairer – by limiting benefits going to the wealthy to levels that never exceed benefits delivered to middle-income Americans.