What does it mean to be poor? Since 1969, the United States has officially measured poverty by how much income flows into a household. If its flow of income is below a designated level – called the poverty line – the household is considered poor, but not considered poor if the flow is above the line. Originally developed by Mollie Orshansky, an analyst at the Social Security Administration, the Federal Poverty Line was considered a very rough estimate – in 1960s dollars – of the minimal income needed to meet basic household needs. This definition of the poverty line has informed U.S. policy decisions for nearly fifty years. Over 80 federal government programs use the poverty line to make decisions about eligibility and funding; and the same line also figures in decisions by non-profits and state and local governments that use billions of dollars in federal funding.

The realities of poverty are much more complex, of course. The poverty line does not take into account the current mix or cost in today’s dollars of goods and services essential for a basic standard of living. It also does not consider availability – whether there are apartments to rent or fresh produce to purchase at a store near the household. For decades, policymakers have acknowledged that the poverty line is an imperfect measure, but the number of people below the poverty line is still a regularly invoked measure of how well the nation is faring economically.

Since the invention of the poverty line, the focus on what really makes sense to measure for gauging actual economic conditions seems to have been lost. A better measure or measures would refer to the kitchen table budget issues facing most families. Can the family eat healthy meals on a regular basis? Can they afford their rent or mortgage, the utility bill, and gas to get to work? These are all direct measures of material deprivation relevant to household-level economic security – or lack thereof. Material deprivation measures are now being adopted across many developed countries, including Canada and Australia; and the European Union incorporates deprivation measures directly into government policy to better reflect the complexity of poverty.

Food Security as an Economic Measure

If material deprivation gets at household-level economic security, then understanding food insecurity is a move in the right direction. Yet official statistics on household food insecurity may not reveal the complete picture, because such information is often too geographically broad to make it useful, especially to local policymakers. Information about demands placed on local nonprofits – such as pounds of food distributed by local charities – can provide an important reality check.

When households experience immediate economic hardships – when they cannot pay all their bills – cutting corners on food is an immediate tactic they use to stretch limited dollars. Skipping meals or purchasing the most filling and cheapest items is one approach to cutting back on food expenses but, ultimately, families that are unable to put food on the table turn to food pantries. Food banks and pantries are now found everywhere, and demand for their help is probably the most direct way to understand current local economic conditions. A family needs a certain amount of food on a daily basis, whether it resides in Santa Monica, California, Athens, Georgia, or Marfa, Texas. Access to food cannot be delayed or avoided, so it reflects real-time needs. If there is a gap between the local cost-of-living and incomes or other resources, the need for nonprofit food assistance will rise – and will be visible in the pounds of food being distributed through community food assistance efforts. 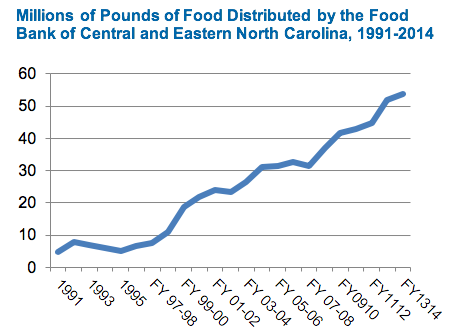 Data from 1991 to 2014 from one major food bank in the eastern United States, the Food Bank of Central and Eastern North Carolina, portray the total amount of food dispersed via approximately 450 member pantries. These data suggest growing economic woes since the mid-1990s – directly contradicting the rosy picture of strong U.S. economic growth presented in many media stories. In fact, food demand started to escalate in the late 1990s, well before the Great Recession. And demand is still growing at relatively high rates.

Does the pattern of demand for food assistance reflect actual hardship? Given the development of a primarily grassroots, faith-based and volunteer national system of thousands of food pantries, there is no reason to suppose otherwise. Food disbursements suggest that economic conditions in this part of the southern United States are deteriorating. Food assistance goes up even as official unemployment declines and the overall economy is growing.

Data on food pantry disbursements suggests the need for better measures of U.S. economic conditions. Food is only one important component of daily household needs. Similar data could be examined about the numbers of households that are late on payments for water or electricity or actually cut off from utility services. Maintaining a household is becoming increasingly unaffordable in many urban areas. And specific, realistic indicators suggest that federal safety net programs no longer fit the needs of the population. Measuring realities well beyond the poverty line should be a prelude to improved governmental and nonprofit effort to help America’s low-income families afford what they really need to live.