“Without a judiciary as diverse as the country it judges, litigants cannot help but question the quality of justice as they stand before a bench that excludes citizens like themselves.” Sally Kenney, The Hill

For this new member spotlight, we’re excited to highlight Dr. Sally Kenney and her advocacy for gender diversity in the judiciary at the federal level.

For her membership contribution, Dr. Kenney published an OpEd in The Hill about the need for greater gender representation in the federal judiciary. In her article, Dr. Kenney argued that President Biden should extend his focus on diversifying the racial and gender makeup of the courts to the Eighth Circuit in particular, which serves the Upper Midwest region. At present, the Eighth Circuit has the unfortunate distinction of being “the least gender diverse of all of the circuits.” In fact, only 2 of the 62 judges that have ever served on the Eighth Circuit have been women: Judges Diana Murphy and Jane Kelly. Following Judge Murphy’s passing in 2018, there is now only a single woman on the bench.

Dr. Kenney decried the disproportionate number of highly qualified women working in the legal field compared to the small number serving in the upper echelons of America’s courts. According to Dr. Kenney, “the problem is neither merit nor a pipeline shortage, but rather discrimination.” Women are skilled, but are largely excluded from opportunities to serve on the bench. In addition to improving the gender and racial makeup of the courts, Dr. Kenney also highlighted the acute need for greater diversity in the professional backgrounds of those nominated. This would help to ensure that litigants have their cases heard by “judges whose experience reflects the diversity of cases that come before them.” The current lack of representation at the state and federal level of the judiciary ultimately harms the citizens the courts serve.

Dr. Kenney has been fighting for gender diversity on the Eighth Circuit for many years. With the help of colleagues and the late Judge Murphy, she co-founded The Infinity Project in 2006 to bring awareness to the lack of women serving on the Eighth Circuit and to provide resources to those that desire to serve on the bench. Years of grassroots organizing in the states served by the Eighth Circuit produced a small victory when President Obama nominated Jane Kelly to replace Judge Michael Melloy in 2013. Dr. Kenney’s involvement with The Infinity Project propelled her to write the piece to “ensure that new vacancies in the Eighth Circuit were filled by women.” Her piece in The Hill, also republished in her local Des Moines Register, is one step in that direction.

To learn more about The Infinity Project, visit here. 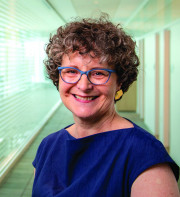 Dr. Kenney is the Director of the Newcomb Institute at Tulane University, and also teaches in Tulane’s law school, Political Science Department, and Global Community Health and Behavioral Science Department. She is the author of the book Gender and Justice: Why Women in the Judiciary Really Matter.