“The need for expanding the Good Samaritan law is urgent. To stem this grim tide of death, we must do more, and we must empower everyone, especially those most likely to witness overdose deaths, people who use drugs and their loved ones, to keep people alive. The first step is to expand the law that protects people who want to help.” - Professor Winifred Tate, Bangor Daily News

For this new member spotlight, SSN is excited to highlight Professor Winifred Tate and her research and advocacy on drug policy in the state of Maine and beyond.

For her SSN membership contribution, Tate published an OpEd via the Maine SSN chapter’s bi-weekly column in the Bangor Daily News. The chapter has a longstanding relationship with the opinion pages of this local newspaper, providing a regular platform for scholars to share their expertise and research findings on a wide array of matters relevant to policymakers in the state.

In her OpEd, Tate details the need for Maine lawmakers to support LD 1862, An Act to Strengthen Maine’s Good Samaritan Laws Concerning Drug-related Medical Assistance. As she writes in the piece, the act was designed to expand Maine’s existing Good Samaritan Law to ensure that everyone in the location where an overdose occurs is protected from being arrested or prosecuted for drug-related crimes.

“Doing research with people who use drugs and people in recovery in Maine, I have seen the devastating toll of overdose death. Advocates with the Maine Recovery Advocacy Project identified LD 1862 as a priority bill, and this op-ed responded to what I saw through my research and what the community wants and needs,” Tate told SSN.

In addition to her OpEd, Tate also testified in front of the Maine legislature’s Criminal Justice and Public Safety Committee in support of the bill in February of 2022. Two months later, the bill was passed by the legislature and signed into law. “Thanks to the mobilizing of advocates around the state and the leadership of the Maine Recovery Advocacy Project, Maine now has the strongest Good Samaritan Law in the country,” said Tate of the development.

Tate’s work in support of LD 1862 builds on her years of experience researching and advocating for better drug policy. Her interest in the topic started during her time as a human rights activist in Colombia, where she witnessed firsthand the repercussions of U.S. drug policy. This research became the focus of her first two books, Counting the Dead: The Culture and Politics of Human Rights Activism in Colombia (University of California Press, 2007) and Drugs, Thugs and Diplomats: US Policymaking in Colombia (University of Stanford Press, 2015).

At Colby College, Tate’s research focus shifted to drug policy in the state of Maine, leading her to create the Maine Drug Policy Lab at Colby College that connects policymakers, scholars, and students in an effort to bring about research-based drug policy reform.

Beyond LD 1862, Tate frequently testifies in the Maine state legislature and works directly with policymakers in the state. At a chapter event hosted at Colby College earlier this year, detailed in our April Chapter Spotlight focused on Maine SSN’s work to build relationships with policymakers, State Representative Charlotte Warren shared:

“I serve on the Criminal Justice and Public Safety Committee. We do a lot of different policy work around lots of reform of the criminal justice system in general…We work a lot on restructuring drug sentencing and drug policy in the state. And I lean on both Winifred Tate and Rob Glover who do a lot of research in these areas…Not only will they come and testify, and their students will come and testify, but they’re actually doing the research...SSN scholars can bring real stories from real Mainers and real Maine families…The things we are trying to decide—when we can talk about it in terms of our own Mainers, our own neighbors, our own community members, it’s just really invaluable.”

Looking forward, Tate will continue to research the impacts of punitive drug policies on communities in Maine and to advocate for evidence-based policy reform. One particular area of interest: drug decriminalization. In March of this year, Tate published a new report, “A Better Path for Maine: The Case for Decriminalizing Drugs” with Meagan Sway and James Myall. The report was based on hundreds of interviews with people who use drugs, people in recovery, law enforcement and health care providers and was published by the Maine ACLU and the Maine Center for Economic Policy. 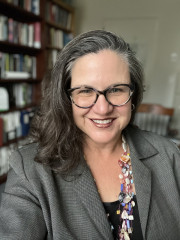 Winifred Tate is an Associate Professor of Anthropology and the Director of the Maine Drug Policy Lab at Colby College. Tate’s research focuses on the formation and impact of drug policy in the Americas. Overarching themes include the impact of problematic drug use, access to treatment in Maine and the history of drug policy formation; how drug use, addiction and recovery is understood and experienced by community members, law enforcement and health care providers; and specificities of how rural Maine women who use drugs are triply stigmatized as women, mothers and for their drug use.