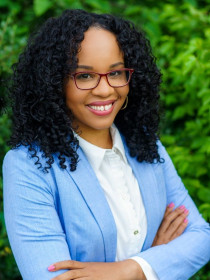 Headley's research focuses on criminal justice management and policy, with a keen focus on racial equity. Overarching themes in Headley's writing include assessing police-community relations, analyzing dispositional outcomes in citizen complaints, evaluating the effects of race during use of force encounters, as well as evaluating body-worn cameras. Headley serves government and nonprofit organizations consulting and providing advising on equitable policies, practices, and programs.
Contributions | No Jargon Podcast | In the News | Publications

Police Use of Force Policy Reform, What do we know about the impact of these reforms?

"A Field Experiment of the Impact of Body-Worn Cameras (BWCs) on Police Officer Behavior and Perceptions" (with Rob T. Guerette and Auzeen Shariati). Journal of Criminal Justice 53 (2017): 102-109.

Evaluates the impact of a body-worn camera program used by the Hallandale Beach, Florida Police Department in the U.S. to determine their impact on police officer behavior and perceptions. Findings revealed that officers with BWCs 1) relied on less intrusive methods to resolve incidents, 2) continued to be active rather than abstaining from community contact, and 3) officer perceptions of the usefulness of BWCs remained pessimistic.

Reviews the national police reform commissions that have occurred in the United States. Finds three areas of similarities across reform recommendations: excessive police use of force, police–community relations, and personnel standards.  Highlights the need for further research to examine what works for reducing police–community tension.

Examines the racial inequities that exist in policing, the reasons for such inequities and what can be done about them.

"Police Use of Force Interactions: Is Race Relevant or Gender Germane?" (with James E. Wright). The American Review of Public Administration (2020).

Analyzes police use of force data from Indianapolis and Dallas police departments to explore differences in the amount of force used by officers in ethnic, racial, and gender matches in police–civilian encounters. Suggests that there are heightened levels of force used when there is racial and gender incongruence or mismatch between the officer and the civilian, particularly White officers interacting with Black civilians.