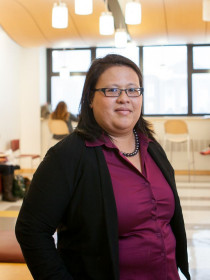 Anna On Ya Law

Law’s research focuses on the interaction between law, legal institutions, and politics. Her substantive areas of expertise are in U.S. immigration and constitutional law, policy, and history. As part of the Kurz Chair duties, Law creates public programming for the Brooklyn College and broader community to educate about the limits and possibilities of the U.S. Constitution in protecting the rights of politically unpopular minority groups. Law is a former Program Analyst of the bipartisan, blue-ribbon, congressional United States Immigration Reform of the mid-1990s that was charged with making policy recommendations to the White House.

Episode 37:
Immigration beyond the Border

"The Historical Amnesia of American Immigration Federalism" Polity 47, no. 3 (2015): 302-319.
Walks through the 1787 Constitution to find that the framers did not grant clear authorization for a national immigration power except for the naturalization clause, which pertains only to one narrow part of immigration policy.
"Lunatics, Idiots, Paupers, and Negro Seamen: Immigration Federalism and the Early American State" Studies in American Political Development 28, no. 2 (2014): 107-128.
Explains why the states, not the national government, were fully in charge of immigration policy until 1882.
"Understanding Judicial Decision Making in Immigration at the U.S. Courts of Appeals" (with Margaret Williams). The Justice System Journal 33, no. 1 (2012): 97-119.
Analyzes an array of factors that explain legal outcomes in immigration cases.
"How the Internal Adjudicative Procedures of the Ninth Circuit Can Disadvantage Pro Se and Political Asylum Claimants" Georgetown Immigration Law Journal 25 (2011): 647-679.
Examines how the internal operational rules of a federal court can affect legal outcomes for non-counseled political asylum applicants.
The Immigration Battle in American Courts (Cambridge University Press, 2010).
Examines the role of the Supreme Court and U.S. Courts of Appeals in immigration policy making in the United States, while also advancing scholarly understanding about the distinct and evolving missions and functions of the two highest federal appellate courts, the U.S. Courts of Appeals, and the Supreme Court.
"The Diversity Immigration Lottery: A Cycle of Unintended Consequences" Journal of American Ethnic History 21, no. 4 (2002): 3-29.
Traces the legislative history of the visa lottery to show that the provision has not much to do with diversity and is in fact a product of pork barrel politics.