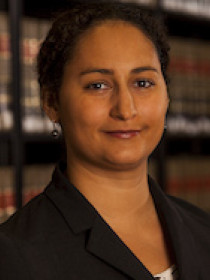 Torres-Spelliscy’s work focuses primarily on the issue of money in politics, but also works on strengthening election laws more generally, as well as improving corporate governance. She is a Brennan Center Fellow, on the board of directors for both the National Institute on Money in State Politics and the Mertz Gilmore Foundation. Torres-Spelliscy is the head of research for the Corporate Reform Coalition, which works on revising corporate and securities laws post-Citizens United v. FEC. She has helped to draft several Supreme Court amicus briefs and provides testimony for law makers who are crafting new laws and new rules.

How the U.S. Securities and Exchange Commission Could Require Transparency for Corporate Political Expenditures

Episode 150:
Giving the Vote Back

Episode 25:
Shooting Your Brand in the Foot

Discusses how Trump's political career has impacted his commercial brand, and vice-versa.

Corporate Citizen? An Argument for the Separation of Corporation and State (Carolina Academic Press, 2016).

Explores how, over the course of American history, corporations have aggressively sought to expand their constitutional rights, and examines the responses from investors, customers, and lawmakers to expanded corporate power.

"The Democracy We Left Behind in Greece and McCutcheon" New York University Law Review 89 (2014).

"Safeguarding Markets from Pernicious Pay to Play: A Model Explaining Why the SEC Regulates Money in Politics" Connecticut Public Interest Law Journal 12, no. 2 (2013).
Discusses how the SEC already regulates money in politics through the Foreign Corrupt Practices Act, MSRB Rule G-37 and Rule 206(4)-5 to explain why the SEC should also require greater transparency of corporate political spending.
"Shareholder-Authorized Corporate Political Spending in the United Kingdom" (with Kathy Fogel). University of San Francisco Law Review 46 (2012).
Explains how the U.K. Companies Act requires shareholder votes before corporate political spending occurs and suggests that the United States should also adopt shareholder approval for corporate political expenditures post-Citizens United.
"The $500 Million Question: Are the Democratic and Republican Governors Associations Really State PACs Under Buckley’s Major Purpose Test?" New York University Journal Legislation & Public Policy 15 (2012).
Explores the funding and spending of the Democratic Governors Association and the Republican Governors Association. The piece examines whether either group should be regulated as a PAC in the states where they spend money to elect governors.