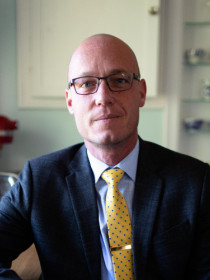 Adams' research focuses on both the effects of body-worn cameras in policing, particularly the unforeseen impact on vulnerable victim populations as well as on police officers themselves. Adams' research retains a focus on the individuals who are affected by the rapid adoption of a surveillance technology which is still not well understood academically or practically. He is a PhD student in the Department of Political Science, with a focus on public administration. Adams served for over twelve years in state and local law enforcement, was named Officer of the Year for the state in 2015, and continues to serve as the Executive Director of the Utah Fraternal Order of Police.

Critiques the increased transparency brought about by body-worn cameras to broadly explore the impact of increased exposure on victims. Concludes by proposing ethical policy principles to limit the harm the new technology could pose to vulnerable victims of domestic and sexual violence.

"'That's What the Money's for': Alienation and Emotional Labor in Public Service" (with Sharon Mastracci). Administrative Theory & Praxis (2018).

Argues that public servants risk becoming alienated due to the unsupported emotional labor demands of their jobs, and that they, in turn, alienate citizens from their government, resulting in harms such as growing distrust of government employees.