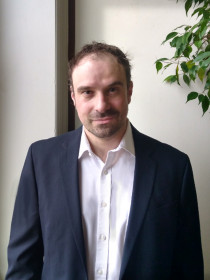 Guardino’s research focuses on media, public opinion, political rhetoric, and U.S. public policy. Overarching themes in Guardino's writings include media effects on policy attitudes, corporate and commercial influences on news coverage, and the connections between media, democracy, inequality and political power. A former journalist, Guardino’s most recent work examines how media institutions have shaped policy debates and public opinion in the political-economic context of rising income and wealth inequality since the 1970s. Guardino also conducts research on news coverage and public opinion in debates about military action, and the effects of media, telecommunications and advertising policy on the democratic vitality of the public sphere.

Uses a series of survey experiments about the scenario of possible U.S. air strikes against Iran Demonstrates the limits of official partisan discourse and the influence of foreign elites in shaping public opinion. Ahows that when domestic elites in both major parties are unified in favor of military action, many Democrats in the public will reject those messages (including cues from a president of their own party), and instead accept messages from non-U.S. elites that are more consistent with Democrats’ generally multilateral and diplomacy-oriented predispositions.

Provides a close textual analysis of early Reagan-era policy rhetoric on tax and budget issues. Argues that this rhetoric reflected and helped to crystallize an emerging—and still potent—ideological discourse that combined pro-market themes with appeals to traditional American values at a pivotal historical moment in the politics of inequality.

"Media and Public Policy: Does Media Coverage Depend on the Medium?" in New Directions in Media and Politics, edited by Travis Ridout (Routledge, 2018), 251-273.

Provides a critical overview of classic and recent research on news framing of public policy issues in a variety of media formats, and presents original empirical analyses of television, print and online news content produced from 1981 through 2017. Argues that superficial framing and elite sourcing driven by the media’s commercial imperatives remains common, even as emerging digital technologies change how policy-related news is produced, delivered and received by the American public.

Examines how major news outlets covered the 2002-2003 debate leading to U.S. military action in Iraq. Demonstrates that popular television news programs largely ignored domestic opposition to preemptive and unilateral military action, but provided significant coverage of foreign and international elite criticism, which caused many Democrats and independents in the public to oppose the invasion.

"The Tea Party and the Crisis of Neoliberalism: Mainstreaming New Right Populism in the Corporate News Media" (with Dean Snyder). New Political Science 34, no. 4 (2012): 527-548.

Provides a theoretical and empirical analysis of the rise of the Tea Party by defining it as a reaction to perceived threats to the neoliberal political-economic order posed by the financial crisis and Great Recession. Examines news coverage on leading cable networks at two key political moments in 2009 and 2010. Argues that corporate media institutions and practices facilitated the Tea Party’s impact by representing this precursor of today’s conservative populism as a rare “mainstream” protest movement.