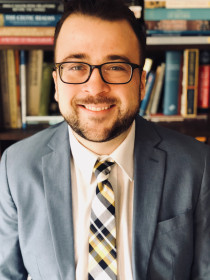 Andrew Pope is the Director of Training at the Scholars Strategy Network. In this role, he works closely with staff and leaders from across the network to develop and deploy trainings that empower scholars to achieve SSN’s mission of using research to improve public policy.

Prior to graduate school, Andrew worked at the Legal Aid Society of Rochester as a Housing Coordinator, where he represented tenants in court and negotiated with landlords and lawyers to keep tenants in their homes. In this role, he also helped to develop and conduct monthly training workshops for low-income residents in the first-time homeowner program and formed relationships with academic, governmental, and non-profit stakeholders to advance the shared goal of achieving housing justice.

He lives in Somerville, MA with his spouse and their three cats Hobbes, Ariadne, & Jo.