Conventional wisdom suggests that conservative political leaders like Barry Goldwater, Richard Nixon, and Ronald Reagan led the way toward mass incarceration, and more recent scholarship highlights the contributions of Democratic presidents like Lyndon Johnson and Bill Clinton. But even though past presidents did help to spur rising rates of incarceration, a focus on political leaders misses an important part of the story. The key question is why these (and so many other) political leaders moved in a punitive direction. Public opinion offers much of the answer. The U.S. criminal justice system became the most punitive among all advanced democracies because politicians responded to an increasingly punitive public.

Internal memos from Richard Nixon’s 1968 presidential campaign offer one window into the influence of punitive public attitudes. Even before the Republican nominating convention, the Nixon campaign was analyzing public opinion polls and developing a strategy based on growing public concern about crime. As explained in a memo sent to key members of the campaign in July 1968: “The Gut vote, then, is leaning toward Humphrey. But this group is not happy. It is concerned, in particular, about the following things: 1. Crime. They are worried about the safety of their families. They are sick of permissiveness in the courts, the city halls, and the Administration.” Although the Nixon campaign worried that Democratic candidate Hubert Humphrey had an edge in the polls, it believed votes could be gained by appealing to the public’s growing demand for tougher criminal justice. As my review of internal memos reveals, Nixon’s staff focused on polling showing the public’s concern with crime throughout the campaign.

If presidents and other political leaders responded to public opinion, the public could have had a profound influence on rising rates of imprisonment. To get a more complete sense, I developed a measure of the public’s punitiveness that combines information from attitudes about criminal justice policy and punishment as revealed in surveys taken from 1953 to 2010. Relevant questions asked about support for the death penalty, prisons, spending on law enforcement, and the idea that prisons should stress punishment rather than rehabilitation.  Questions also probed whether respondents thought the courts were too lenient. By combining responses from 33 such questions repeatedly asked in public opinion surveys (nearly 400 times in total), I created a global measure of public views that spans almost 60 years. As the following figure shows, this measure has closely tracked changes in the incarceration rate – and the strength of the relationship is stunning.

Public Punitiveness and Changes in U.S. Incarceration, 1953 to 2010 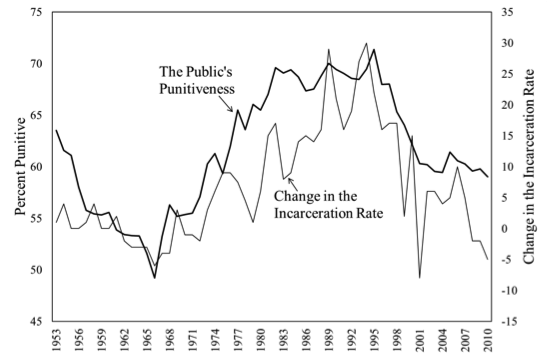 Shifting public attitudes were a key factor in the rise of mass incarceration – as also shown by my analyses of political leaders ranging from Barry Goldwater to Lyndon Johnson, along with my examination of state-level incarceration rates and spending on corrections. My results also suggest three key insights for those who now want to reduce mass incarceration.

Read more in Peter K. Enns, Incarceration Nation: How the United States Became the Most Punitive Democracy in the World (Cambridge University Press, 2016).

The Time for Action on Gun Control Is Now, and Americans Support ItMay 28, 2022
How Journalists May Inappropriately Portray People with Mental Illness Killed by PoliceNovember 13, 2017
Why Mass Shootings Prompt Little Change in Public Opinion about Gun ControlSeptember 12, 2017