Criminal justice reform has been hailed by politicians and pundits alike as a potential bright spot of bipartisan consensus in today’s polarized, gridlocked political environment. The Committee on Causes and Consequences of High Rates of Incarceration recently concluded that standalone sentencing laws should be changed, because these laws have reduced or eliminated judges’ ability to tailor punishments to the facts and circumstances of each particular crime. Mass incarceration could be reduced if such laws changed. Likewise, many states are reforming their criminal statutes in order to sentence a greater number of nonviolent, first-time offenders to community-based sanctions instead of incarceration. Virtually all community-based sanctions, such as probation or residential drug treatment, are less expensive than incarceration, so this shift could free up resources states have spent on prisons to use instead on crime prevention.

Full consensus on such changes has not been achieved, however. An intra-party split has opened within the governing federal Republican Party over the question of sentencing reform. On the one hand, Senate Judiciary Chairman Chuck Grassley and Senior White House Advisor Jared Kushner lead a coalition pushing for comprehensive justice reform. But on the other hand Attorney General Jeff Sessions has publicly condemned sentencing reform proposals and continues to defend mandatory minimum sentencing for all types of offenders. This GOP division has slowed the momentum of several comprehensive reform bills in Congress and aroused opposition to more modest bills that omit sentencing reforms, such as the First Step Act.

What Do Americans Think?

In late September 2016, I gathered survey data from a nationally-representative sample of White and Black Americans in order to study race, politics, and public opinion about contemporary sentencing reform ideas. To speak to the present debate on Capitol Hill, I asked my respondents to state their support or opposition to key proposals: Should “nonviolent property offenders (who committed crimes like burglary or theft)” and “nonviolent drug offenders (who committed crimes like drug possession or drug selling)” be sentenced to community-based supervision instead of prison in order to save states money?

Public Support for Community-Based Sanctions Instead of Prison 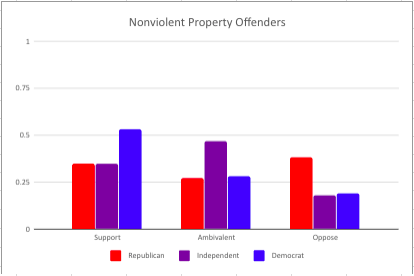 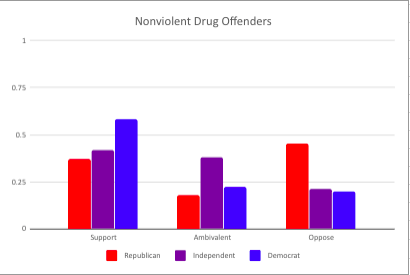 Mass public policy preferences do not have much policy impact unless they affect votes. In additional analyses, I identified respondents who reported voting in the 2012 presidential election. Since past voting is a strong predictor of future voting, these are the people who are most likely to influence public policy through voting. Among prior voters, 49% expressed support for sentencing property offenders to community-based sanctions, and 51% expressed support for diverting drug offenders away from prison. Both sets of supporters outnumber those who are opposed or ambivalent. Politically-engaged voters clearly support sentencing reform.

For theoretical reasons tied to a larger research project, I only gathered data from non-Hispanic White and Black Americans. However, other studies show that Latinos typically express criminal justice policy preferences more closely aligned to African Americans than Whites. Overall, it seems clear that Attorney General Sessions’ opposition to sentencing reforms for nonviolent offenders is not only at odds with expert opinion, but is also out of line with the views of most Americans outside the core Republican base. There are ample political and empirical reasons for Congress and the states to reexamine sentencing policies in order to curb the growth of mass incarceration.

The Evidence Shows That "Stand Your Ground" Laws Undermine Law Enforcement and Public SafetyJuly 22, 2015
The Unremarkable, Unceremonious End of This Pandemic Should Frighten UsApril 10, 2022
Opioid Settlement Funds Must Be Used To Tackle Maine’s Addiction Crisis January 21, 2022