As the United States recently commemorated the fiftieth anniversary of the March on Washington, commentators noticed that issues of poverty have since largely gone missing from America’s public agenda. “What Happened to Jobs and Justice?” wrote William P. Jones in the New York Times, in a typical reflection. Our research pins down that, indeed, a big shift in public discussion has occurred – with important consequences for government efforts to help the poor.

From Sympathy to Blame; From Generosity to Cut-Backs

In the early 1960s, Americans and their leaders began to focus on domestic poverty. The daily struggles of the poor were sympathetically portrayed in Michael Harrington’s influential book The Other America; Dr. Martin Luther King, Jr. called for economic justice; and national leaders like Bobby Kennedy and Lyndon B. Johnson pushed active government efforts to fight poverty. The focus of media reflected the public outcry, and public policy followed suit.

By the late 1960s, the New York Times ran an average of about three articles per day focused on poverty in the United States, and the vast majority focused sympathetically on barriers faced by poor people as they struggled with social breakdown and obstacles to economic success. Congress responded by passing Medicare, Medicaid and Food Stamps. In the Republican Administrations of the late 1960s and early 1970s, government aid continued to grow with the passage of the Earned Income Tax Credit and other spending increases. The War on Poverty quickly lifted millions at the bottom of the U.S. economic ladder.

But then the public conversation started to change. The poor were increasingly portrayed as shiftless and lazy people who refused to take responsibility for their own lives. Many were also portrayed as cheaters. In 1976, Republican presidential candidate Ronald Reagan told crowds about a Chicago woman using 80 names and 30 addresses to collect welfare benefits. Once described as vital safety net efforts, government programs to help the poor were increasingly pilloried as recipes for dependency, waste, fraud, and abuse – and soon those government programs were cut back and became much less effective in pulling Americans out of poverty.

In our research, we have developed rigorous quantitative measures to pin down how changing media coverage influenced government generosity toward the poor – and the bang for the buck Americans get from programs meant to reduce severe economic deprivation. Here are the key trends displayed in the figure below: 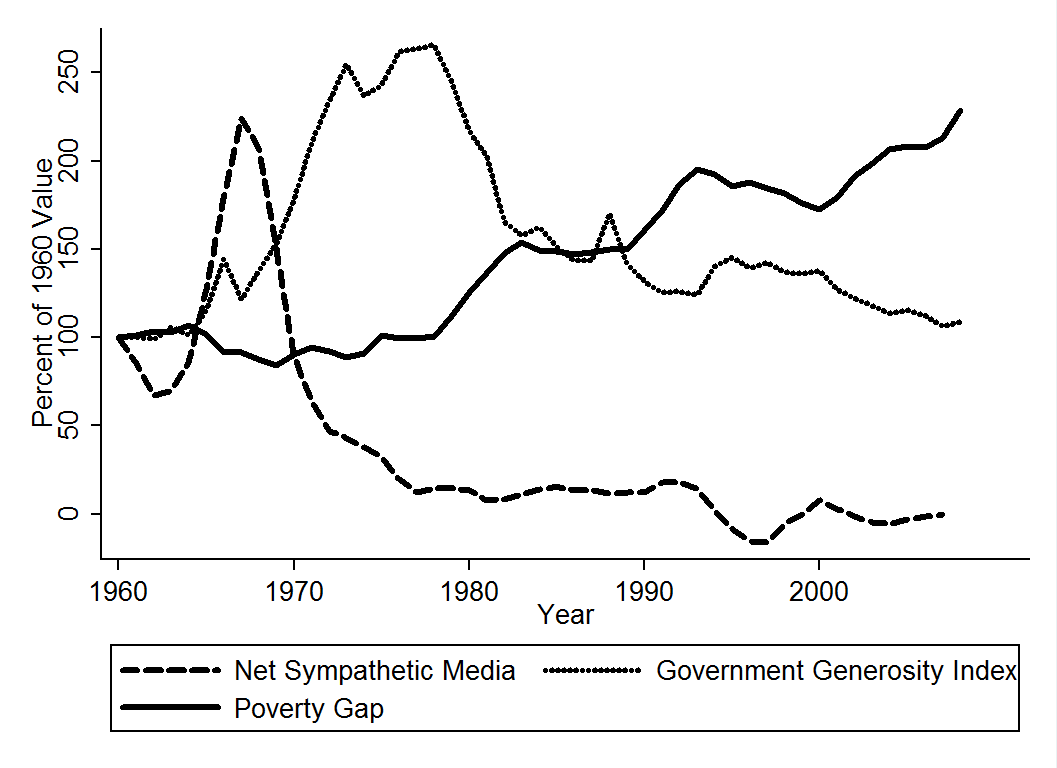 The media changed sharply in the amount and tone of its coverage, and government programs became less generous. Between 1960 and 1973, following the increase in public attention on the poor as deserving of aid, government generosity grew by more than 2.5 times. Absolute levels of public spending on low-income people continued to rise. But when inflated medical spending is removed and adjustments are made for government growth and increased poverty, net spending on the dozens of poverty-relief programs such as TANF, SNAP, and Pell Grants became less generous. We are no more and no less generous to the poor now than we were in 1960, before the War on Poverty. We are doing much less than at the peak of sympathetic media coverage and government anti-poverty efforts. And the impact of federal spending on bringing people up to the official poverty line also receded. The poverty gap held steady for 20 years in spite of population increases, but between the late 1970s and the present the gap increased by 2.5 times. The United States can reduce poverty, but as our national debate shifted from sympathetic to antagonistic, we have turned away.

In his editorial in the New York Times, William Jones concluded that the “solution may not be another march on Washington. But real changes in policy, and the defense of previous victories, require the combination of institutional backing, coalition building and ambitious demands that brought so many people to the National Mall in 1963.” Our research suggests no easy answers for those who want to re-focus America on fighting poverty. But it does suggest that a first step should be to launch a renewed public dialogue. To ensure all people can reach economic prosperity, the United States must first be more respectful and sympathetic to low-income Americans.

White Nationalism and Militant Islamism are Transnational Terrorist ThreatsNovember 5, 2021
Why Nevada Needs the Nepantla Program and Others Like ItAugust 1, 2019
What Americans Think about Poverty and How to Reduce ItMarch 21, 2018