How to Address Segregation in Chicago

The City of Chicago, and the region more generally, suffer from extreme racial residential segregation. Despite the facts that 50 years have passed since housing discrimination became illegal, that the black middle class has expanded, and that whites’ racial attitudes have changed, Chicago remains one of the most racially segregated cities in the country.

Racial residential segregation has negative consequences for the health, well-being, and the social fabric of our city. Where you live impacts where you go to school, the jobs you have access to, the quality of your healthcare, your exposure to environmental hazards, your exposure to crime, the extent to which you accrue wealth, and many other factors. As such, racial residential segregation has been referred to as the ‘structural lynchpin’ that helps perpetuate racial inequality.

As illustrated in the 2010 Chicago regional map below, racial groups are segregated into different neighborhoods, with African Americans predominately on the south and west sides, whites to the north, and Latinos to the northwest and southwest. There are very few neighborhoods where all groups are represented. 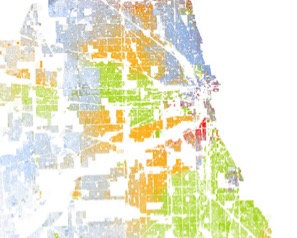 The True Causes of Segregation

A complicated web of economics, discrimination and preferences—along with social networks, lived experiences, and the media—shape how people come to live where they do. Although there is a common misperception that segregation exists because people prefer to live ‘among their own kind,’ there is a large body of rigorous research that clearly demonstrates that this is not true. Chicago’s segregation did not happen by accident. Local, state, and federal policies – alongside resident’s actions and reactions – embedded segregation in our city. The result is a self-perpetuating system of segregation, which negatively impacts our region and all of its residents.

Because of segregation, the impact of the housing boom—and subsequent bust—was felt more deeply by communities of color. In the early 2000s, black and Latinx homebuyers were targeted for subprime loans, even when their credit scores qualified them for less-risky mortgages. This concentrated foreclosures in Chicago’s communities of color, resulting in falling housing prices and vacant and abandoned properties. Tens of thousands of rental housing units in the city were also foreclosed, which left many south and west-side communities with substantial losses in affordable housing. Today, homeownership rates among black and Latinx Chicago area residents lag 20 percentage points below their white peers. And to make matters worse, the median property values for black and Latinx-owned houses are almost $100,000 less than those of white home owners (for further analysis see the Institute for Research on Race and Public Policy report: A Tale of Three Cities: The State of Racial Justice in Chicago Report.

A recent study by the Urban Institute (2017) quantified the benefits of breaking this cycle of segregation. They found that a reduction in segregation would increase educational attainment for blacks and whites, with 80,000 more adults finishing Bachelor’s degrees. In addition, this study suggested less segregation would reduce the homicide rate by 30%, increase black per-capita income, and add $3.6 billion dollars to the region’s economy.

Given the many ways that segregation negatively impacts our city and its residents, mayoral candidates must consider a range of policies and initiatives to begin to systematically tackle the issue. Because segregation has many causes, there is no single policy solution. However, policy options do exist that can help us break this cycle of segregation.

Evictions Matter for Neighborhood HealthJuly 2, 2022
COVID-19 Isn’t the Reason That US Life Expectancy Is StagnatingAugust 14, 2021
How to Help Unaccompanied Children from Central America—Ideas from the Washington, DC AreaJune 11, 2021