The U.S. economy added 2.2 million private sector jobs during 2013, more in the second half of the year than the first. That’s progress, but the media presented a more upbeat picture than is truly warranted, while the Obama administration talked more than it acted about job growth. Most new jobs are in low-wage sectors and labor force participation is declining. The number of people looking aggressively for jobs at any wage is likely to grow, so the outlook is clouded.

The largest sector creating jobs in 2013 was the lowest paying sector in the U.S. economy. Full-time workers in the leisure and hospitality sector earn less than $25,000 a year, and of course many workers cannot get full-time hours, so the 14.3 million workers in that sector brought home an average of $18,397 each last year. Real wages fell, moreover, in two other sectors where large numbers of jobs were added (education and health, plus retail trade). Because so many would-be workers are chasing jobs, labor has little leverage when it comes to wages, even as the economy struggles back to life. Things could get worse in 2014, if Congress does not restore long-term unemployment benefits that would otherwise have flowed to between four and five million people through the course of the current year. Many will look for any job at any wage, creating further downward pressure on wages.

The U.S. working-age population (over age 16 and not in schools, the military or prisons) grew by 2.4 million people during 2013, yet the number of people in the labor force declined by about 550,000. Job creation is not even keeping up with the growing population of workers. 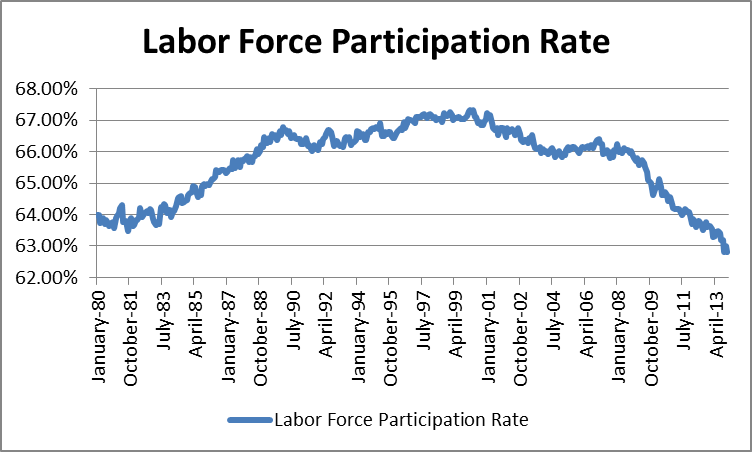 At the end of 2013, the United States had 118.5 million full-time employees and 26 million part-time employees supporting a nation of 316 million people. Workers are older than they used to be, which means that declining labor force participation cannot be explained away by voluntary early retirements. Many older Americans are hanging on to their jobs for dear life in the post-recession world of diminished or non-existent retirement wealth.

On the brighter side, 2013 saw the sharpest boost in employment for the 16 to 24 year-old age group since the recession, and also improvements for 25 to 34 year-olds. But employment remained flat for 45 to 54 year-olds. In their prime earning years, these workers are relatively expensive to employ – and thus vulnerable in an economy with downward wage pressures.

The economy’s gains in 2013 were widely over-celebrated, even as little was done by the Obama administration, Congress, or the states to tackle evident continuing problems. Extraordinary monetary policies are unlikely to remain in place, but policy makers can hardly read into declining headline unemployment rates any signs of real labor market tightness – not with so many people still looking for work at almost any wage, dropping out of the labor market altogether, or struggling to make ends meet with eroding incomes. The U.S. economy moved forward in 2013, but progress was mediocre and prospects remain clouded.

No, Generous Unemployment Benefits Are Not Driving the Labor ShortageOctober 8, 2021
The Economics of Child Care Supply in the United StatesSeptember 23, 2021
New Preschool Program in Oregon is a Model for the Nation—But Challenges RemainMay 27, 2021