The Spread of COVID-19 in U.S. Workplaces and the Role of the Occupational Health and Safety Administration

As the first wave of the pandemic hit America in March 2020, around a third of workers began working remotely. This was perhaps the biggest change in Americans’ working lives for generations, and it likely saved thousands of lives. But the continued functioning of the economy—and people’s ability to retain some semblance of normalcy—depended on frontline workers, about two-thirds of workers, who continued to go into workplaces throughout the pandemic. Those on the frontlines kept America fed, helped shops stay open, and allowed trains and buses and delivery vans to keep running.

This work came at a cost.  As a highly contagious airborne respiratory illness, coronavirus spreads easily indoors, and coming into close contact with other people increases risk of exposure. Many frontline jobs have exactly these characteristics: food processing work usually takes place in crowded facilities with poor ventilation; taxi drivers will have many different passengers in their car over the course of a shift; healthcare and nursing home workers tend to interact with people particularly susceptible to illness. Such jobs are rarely well paid or high status, and they are disproportionately worked by socioeconomically disadvantaged Americans. Low-income, Black, Hispanic, Indigenous, and Immigrant Americans are all disproportionately likely to have been frontline workers during the pandemic. Unsurprisingly, frontline workplaces have been the sites of many major outbreaks. According to widespread reporting, outbreaks in meatpacking facilities early in the pandemic led (as the CDC estimated) to COVID-19 infections for almost one in every ten meatpacking workers. Studies also record that more than 3,600 healthcare workers lost their lives in the United States by April 2021.

Despite the obvious risks to many kinds of work during the pandemic, there is astonishingly little public data on the spread of the disease through U.S. workplaces. We do not even have breakdowns of COVID cases or deaths by occupation and industry, let alone by individual employers, who are legally mandated to protect the health of employees. Without these data, we are at risk of underestimating the role workplaces played in spreading the virus; and we are likely to miscalculate the extent of workplace health disparities and their contributions to racial and ethnic inequalities during the pandemic.

To get round the data problems, we examined shifts across various jobs in the amount of sick leave workers took in Spring 2020 compared to earlier years. The Federal Government collects and releases this data monthly as part of their labor force data. By making such comparisons, we are able to track health trends beyond usual baselines for workers in different jobs and identify changes in disease burden in the American workforce attributable to the pandemic.

Our analyses show a startling growth in health inequalities across occupations. Among transportation, personal care, and food preparation and serving workers, an additional one worker in every 100 was absent each week between March and June 2020, compared to earlier years.  For production and healthcare support jobs, an additional .8 workers per hundred were absent. In contrast, we did not find any increase at all in most professional occupations. The only exceptions were healthcare and education—but even there, the increase was only around a quarter of the harder-hit occupational groups. Looking in more detail, we found three specific occupations in which an additional five workers per hundred were absent over this period: meatpacking workers, bartenders, and taxi drivers. In short, the largest increases in absences came in jobs in which remote work is impossible, and where the work involves close contact with others indoors. 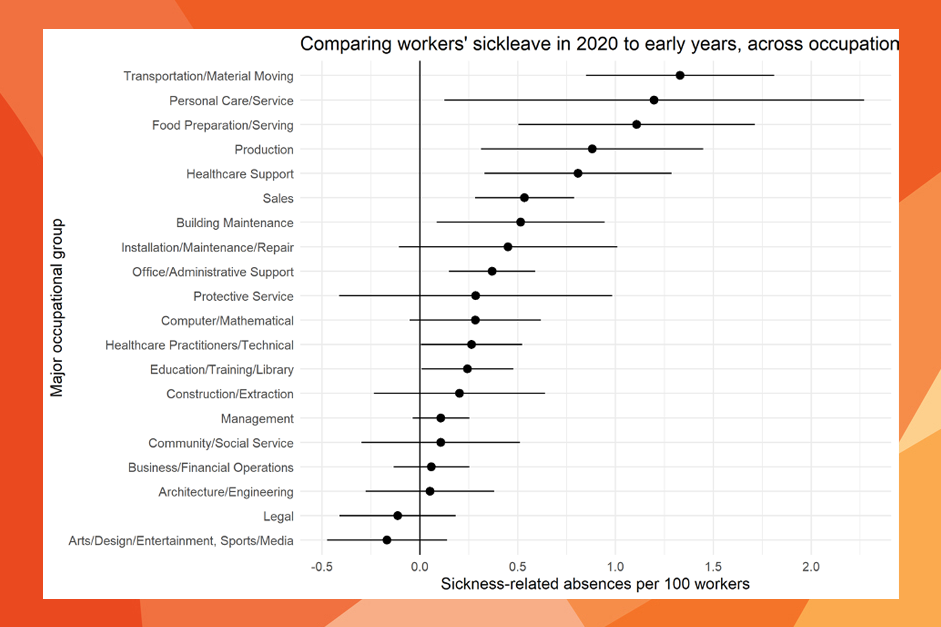 Black, Latino/a, and low-income Americans disproportionately caught, and died from COVID.  We know that working conditions were typically worse for these workers even prior to the pandemic. Safety conditions are worse in low-paying jobs, with many more low-income workers hurt or killed on the job than high-income workers. Discrimination is still widespread in many workplaces, which can, in turn, have important health consequences for effected workers.

Our research suggests that workplace inequalities also became an important explanation for health inequalities by race/ethnicity and income during the pandemic. Compared to richer and white Americans, low-income, immigrant, and racial/ethnic minority workers have been substantially more likely to labor in frontline jobs throughout the pandemic. We show that the proportion of black, Latino/a, immigrant, and Native workers in occupations all correlate with increased numbers of workers reporting sick during the pandemic. Low wages and a lack of access to health care also characterize jobs that registered larger increases in sick leave, further showing how such sectors exposed the most vulnerable workers to the worst health risks of the pandemic.

Some number of deaths in frontline jobs during the pandemic may have been unavoidable, but the extent of health inequalities across workplaces is also the result of longstanding U.S. policy failures. Put simply, both federal and state governments have done far too little to keep workers safe, both before and during the biggest health crisis in our lifetimes. This policy failure is particularly egregious given that the federal government has an entire agency designed to protect the health and safety of American workers: the Occupational Health and Safety Administration (OSHA).

OSHA’s mandate is to ensure safe working conditions in American workplaces, and it has a budget of $500 million annually and legal powers to inspect workplaces, write and enforce workplace safety regulations, and investigate and penalize violations. However, OSHA’s ability to regulate workplaces during the pandemic has been limited by the supreme court, which struck down the federal government’s vaccine and testing mandate for large workplaces.  Even prior to this legal reversal, however, OSHA was criticized for failures to collect adequate COVID data, dragging its feet in issuing rules and guidance, and running an inadequate inspection regime.  In fact, fines for employers endangering their employees’ health during the pandemic have been paltry. Daily COVID deaths in the United States remain high, so OSHA efforts to issue and enforce stricter rules, particularly on air quality and ventilation, could still save lives.

Longer term, the United States needs to properly fund OSHA and toughen penalties for non-compliance. The agency’s failures during the pandemic are not entirely attributable to an a presidential administration hostile to workers’ interests, but also reflect longer-term declines in the capacity of OSHA to do its job. It has fewer inspectors today than at any time since the 1970s and only an eighth of the number recommend by the International Labor Organization. OSHA inspections have been shown to improve the safety of workers, but with its current number of inspectors, it would take OSHA 129 years to inspect all the workplaces under its purview. Fines are typically low, with meatpacking plants, where thousands got sick in spring 2020, typically receiving fines of less than $30,000 for violations. Funding an increase in inspectors and exacting greater penalties on employers is what the government needs to do to protect the health of the workers who have kept America open during the COVID-19 crisis, as they do every month and year in other times as well.  Front-line workers are indeed vital for America, and their health and safety should be a national priority.

Read more in Thomas Lyttelton and Emma Zang, "Occupations and Sickness-Related Absences During the COVID-19 Pandemic." Journal of Health and Social Behavior (January 2022).

(IM)Migrant Health AND COVID-19 RISKFebruary 13, 2022
A Federal Job Guarantee: Anti-Poverty and Infrastructure Policy for a Better Future April 30, 2020
Supporting Tipped Workers in the Pandemic and BeyondApril 22, 2020