What Happened to Women's Health When the State of Ohio Forced the Use of Outdated Abortion Procedures?

In 2011, an Ohio law took effect mandating the use of an outdated protocol for the use of medications to induce abortions previously approved by the Food and Drug Administration (called the “FDA” for short) in the year 2000.  Recent developments in evidence-based medicine, reaffirmed by recent revised FDA labeling of the drug mifepristone in 2016, have led to approaches known to be more safe and effective for patients. What happens when health providers in Ohio were forced to use older, less scientifically sound procedures?

Our research team based at the University of California, San Francisco research group Advancing New Standards in Reproductive Health sought to understand whether Ohio’s 2011 legal change had any impact on outcomes for 2,783 medication abortions performed for women (within less than 49 days of their last menstrual periods) at four Ohio health facilities or clinics. Our study asked whether medication abortions performed under the old standards led to a need for additional medical treatments to complete abortions or side effects.  In addition, we examined the rate of abortions done with medication versus those done using aspiration techniques before and after the Ohio law.

After the 2011 law went into effect and doctors were forced to administer mifepristone under the 2000 FDA protocol rather than use the accepted standard of care, more women required additional medical treatments to complete their abortions. 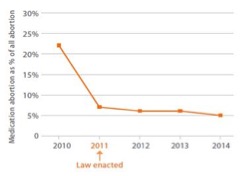 Legislative Interference in Medical Practice is Dangerous for Women’s Health

Our research findings support a clear-cut bottom line:  Patients suffer when legislators try to dictate medical practices. Through research and clinical experience, health providers and women’s health experts have determined the optimal timing and dosage for using medications to induce abortions. This approach to abortion has consistently been shown to be safe, and evidence-based regimens have zeroed in on the best ways to maximize effectiveness and minimize side effects and adverse events.  Federal regulators need to regularly update recommended approaches to bring them into line with the latest scientific findings.

These results from Ohio suggest that many women do not experience better health outcomes when legislatures decide how medicine should be practiced.  Such interference can force healthcare providers to provide care that falls below the accepted standard of care. By mandating adherence to an outdated protocol, doctors in Ohio were forced to treat women with a medication protocol that did not have any benefits for women’s health.  Medicine by legislative mandate just does not work.