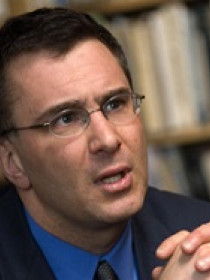 Gruber has taught economics at the Massachusetts Institute of Technology since 1992, and his research focuses on the areas of public finance and health economics. He is also the Director of the Health Care Program at the National Bureau of Economic Research, where he is a Research Associate. He is an Associate Editor of both the Journal of Public Economics and the Journal of Health Economics. In 2009 he was elected to the Executive Committee of the American Economic Association. He is also a member of the Institute of Medicine, the American Academy of Arts and Sciences, and the National Academy of Social Insurance. In 2006 he received the American Society of Health Economists Inaugural Medal for the best health economist in the nation aged 40 and under. From 2003-2006 he was a key architect of Massachusetts’ ambitious health reform effort, and in 2006 became an inaugural member of the Health Connector Board, the main implementing body for that effort. In that year, he was named the 19th most powerful person in health care in the United States by Modern Healthcare Magazine. During the 2008 election he was a consultant to the Clinton, Edwards and Obama Presidential campaigns. During 2009-2010 he served as a technical consultant to the Obama Administration and worked with both the Administration and Congress to help craft the Patient Protection and Affordable Care Act.

The Truth about Health Reform, Jobs, and the Economy

"The Impact of Patient Cost-Sharing on the Poor: Evidence from Massachusetts," (with Amitabh Chandra and Robin McKnight), National Bureau of Economic Research, March 31, 2012.
Studies the effects of greater patient cost-sharing on low-income enrollees in Massachusetts’ Commonwealth Care program and finds no (detectable) evidence of offsetting increases in hospitalizations or emergency department visits in response to the higher copayments, either overall or for the chronically ill in particular.
"How Did Health Care Reform in Massachusetts Impact Insurance Premiums?" (with John A. Graves). American Economic Review 102, no. 3 (2012): 508-513.
Analyzes changes in private insurance premiums in Massachusetts between 2002 and 2010. In contrast to earlier estimates from Massachusetts (Cogan, Hubbard and Kessler 2010), this study found no statistical evidence of changes in group premiums; by contrast, it found large reductions in non-group premiums in Massachusetts relative to the rest of the U.S.
Health Care Reform: What It Is, Why It’s Necessary, How It Works (with Nathan Schreiber and illustrator) (Hill and Wang, 2011).
Explains the ins and outs of President Obama’s signature health care reform law, the Affordable Care Act, in an engaging and innovative medium: the graphic novel.
"Buying Health Care, the Individual Mandate, and the Constitution" (with Sara Rosenbaum). The New England Journal of Medicine 363 (2010): 401-403.
Dispels persistent rumors about the nature and legality of the Affordable Care Act while making the case that the law is about altering individual economic conduct in the service of ensuring access to affordable health care coverage for the maximum number of citizens.
Public Finance and Public Policy, 3rd Edition (Worth Publishers, 2009).
Explores the way public finance issues are evaluated, implemented, and researched in the real world today by providing a survey of essential, traditional topics in the field with an emphasis on empirical work and coverage of transfer programs and social insurance.