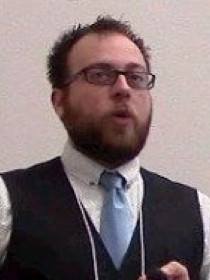 LaBouff is a social psychologist who focuses on relationships between different groups. Most of his research investigates the roles of beliefs (both religious and moral) and religious group membership on people’s attitudes and behaviors. He is particularly interested in how these beliefs, and reminders of these beliefs, might influence cultural and political processes. For example, how might reminders of religion at the polling site influence support for specific policies? How does bias against other religious, racial, or social groups influence our attitudes towards policy? How can we support communication between groups that promotes understanding and respects the complexity of our political problems?

How Balloting in Churches Sways Attitudes and Votes

The Roots of Minority Popular Opposition to Immigration Reform

"Symbolic Racism: Racial Prejudice toward African-Americans as a Predictor of Opposition to Universal Health Care" (with Megan J. Shen). Journal of Social and Political Psychology (2014).
Discusses several studies demonstrating that racial prejudice plays an important role in predicting policy support for universal health care initiatives, consistent with a long history of the influence of racial attitudes on U.S. policy.
"Differences in Attitudes toward Outgroups in Religious and Non-Religious Contexts in a Multi-National Sample: A Situational Context Priming Study" (with Wade C. Rowatt, Megan K. Johnson, and Callie Finkle). International Journal for the Psychology of Religion 22, no. 1 (2012): 1-9.
Demonstrates that in a sample representing more than thirty nationalities, participants surveyed in front of a Christian religious building expressed more “religiously-consistent” attitudes than those surveyed in front of a civic building. Participants near the church reported more politically conservative attitudes, and more prejudice towards racial and social groups. Implications for polling locations in the United States are discussed.
"Facets of Right-Wing Authoritarianism Mediate the Relationship between Religious Fundamentalism and Attitudes toward Arabs and African Americans" (with Megan J. Shen, Wade C. Rowatt, Julie Patock-Peckham, and Robert D. Carlisle). Journal for the Scientific Study of Religion 51 (2012): 128-142.
Investigates the paradoxical relationship between racial prejudice and different types of religious belief. Here, we find that the aggression component of authoritarian attitudes (belief that individuals have a responsibility to aggressively prevent perceived threats to their group or culture), which are often associated with fundamentalist religious beliefs, is responsible for the observed relationship between religiousness and racial prejudice. Further, we find that those primed to think about religion subliminally (by flashing religious words so fast that they can’t be perceived) report more negative attitudes towards groups that threaten religious values.