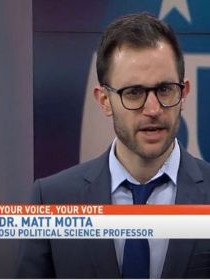 Motta's research focuses on a wide range of topics related to American politics, public opinion, science communication, and both health and environmental policy. Motta is especially interested in identifying the social and political determinants of anti-science attitudes, and investigating their policy impact. He is also broadly interested in designing communication strategies that promote effective engagement between the public and the scientific community on politically contentious issues.
Contributions | No Jargon Podcast | In the News | Publications

How Interest in Science Boosts Trust in Climate Scientists

"Gay” or “Homosexual”? The Implications of Social Category Labels for the Structure of Mass Attitudes" (with Zein Murib and Brianna A. Smith). American Politics Research 46, no. 2 (2018).

Uses American National Election Study and General Social Survey data to examine how question wording shapes responses given about rights for marginalized groups. Focuses on using gay/lesbian versus homosexual and finds that the latter results in less support for gay and lesbian rights.

"The Dynamics of Political Implications of Anti-Intellectualism in the United States" American Politics Research 46, no. 3 (2017): 465-498.

Finds that anti-intellectualism is associated with not only the rejection of policy-relevant matters of scientific consensus but support for political movements (e.g. "Brexit") and politicians (e.g. George Wallace and Donald Trump) who are skeptical of experts. Shows that these effects can be mitigated. Discusses how scholars might build on this research to study the political consequences of anti-intellectualism in the future.

"What Do Interviewer Intelligence Ratings Actually Measure?" Research & Politics 3, no. 3 (2016).

"The Polarizing Effect of the March for Science on Attitudes toward Scientists" PS: Political Science & Politics (2018).

Considers how March for Science rallies that took place across the United States in late April 2017 influenced Americans' attitudes toward scientists and the research they produce. Shows that the March appears to have had little effect on the public's attitudes about scientific research. Calls attention to the possibility that the political actions of scientists can shape public opinion about them.

""Gay" or "Homosexual"? The Implications of Social Category Labels for the Structure of Mass Attitudes" (with Brianna A. Smith, Zein Murib, Timothy H. Callaghan, and Marissa Theys). American Politics Research 46, no. 2 (2017): 336-372.

"The Enduring Effect of Scientific Interest on Trust in Climate Scientists in the United States" Nature Climate Change 8 (2018): 485-488.

Finds that interest in science at age 12-14 years is associated with increased trust in climate scientists in adulthood (mid thirties), irrespective of Americans' political ideology.