What is the role of money in politics? To much of the American public, it seems obvious that political contributions assure special treatment for donors. More than four-fifths of Americans say that money has too much influence in U.S. politics. The Supreme Court has said, however, that political donations are a form of speech, simply a statement of support. Writing for the majority in the 2010 Citizens United case, Justice Kennedy said “there is only scant evidence that independent expenditures even ingratiate.” Similarly, in another majority opinion for the 2003 case McConnell v. FEC, Kennedy said “the Government has not produced evidence that Members corruptly favor soft money donors to their party.”

For years, political scientists have provided contradictory arguments reinforcing both sides of this argument. Most have looked at the role of money in a very narrow way, discovering that Congressional roll call votes do not for the most part line up with donation patterns. A few other political scientists have asked whether donors get more attention to their issues – for example, by influencing bills introduced in Congress. Our research uses better data and methods to try to overcome previous empirical impasses.

An Experiment on Money in Politics

To provide better evidence about the role of money in politics, we conducted a randomized experiment to see if elected officeholders would grant more special favors to donors than to their regular constituents. Experiments are an excellent way to determine if something – in this case, political donations – actually makes a difference. For example, in clinical trials measuring the effectiveness of drugs, some patients are randomly assigned to receive the new drug, while others receive a sugar pill. Then researchers look to see if the drug causes better outcomes. In some areas of research, political scientists can use a very similar experimental approach.

Our experiment was conducted in partnership with a political group that was trying to build support for an environmental bill by scheduling meetings between their members and 191 representatives serving in the U.S. Congress. All members of this group happened to be political donors, primarily small, grassroots donors. When the group contacted Congressional offices to schedule meetings, one-third of the time it referred to its members as “active political donors” looking to meet with their Member of Congress or their senior staff. The other two-thirds of the time, the requests for meetings were simply said to come from “concerned constituents.”  As political science researchers, we were able to track whether the requested meetings actually occurred – and, if so, did those attending from the Congressional offices include senior staffers. Would mentioning “active donors” make a difference?

The following figure shows that environmental group members labeled “donors” were far more likely to end up meeting with their member of Congress or a senior staffer than the group members who merely introduced themselves as “constituents.” Just two  percent of Congressional offices arranged meetings with the legislator or chief of staff when the request came from “constituents,” but 13 % did so when the potential attendees were said to be “donors.” In another way of looking at the results, 19 % of the “donors” were able to meet with senior staffers, whereas only 5 % of the “constituents” gained such access. 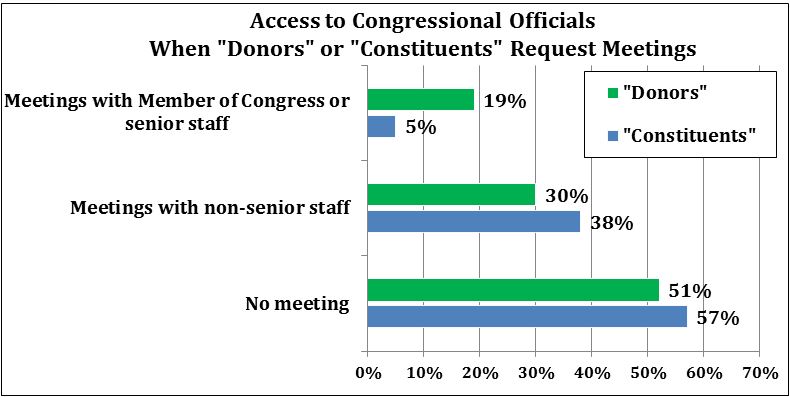 Money rarely delivers results simply by buying particular votes. That may happen sometimes, but differential access is a more subtle – and pervasive – form of influence that donations almost certainly can buy. Access matters, because it allows individuals or groups to make a case to representatives in government and influence legislative priorities. Access is necessary, if not sufficient, to influence policy outcomes, yet unlike roll call votes, patterns of access are rarely publicly visible. Our experiment found a way to make some patterns more visible, offering systematic new evidence that “donors” get a hearing more readily than ordinary constituents.

Our results raise troubling issues, because it was so easy for the so-called donors to get extra access. These were not well-heeled donors already well known to the legislators and their staff. None of them used the last name Koch or Soros or pointed to huge super PAC gifts. If even run of-the-mill people who call themselves donors can get extra access to Congressional offices, imagine how much more readily big donors can get a hearing.